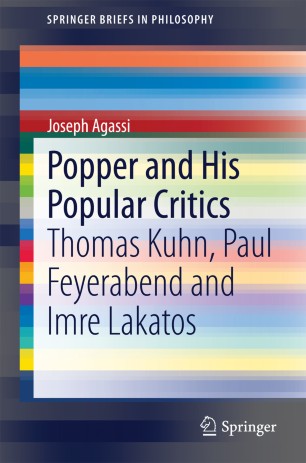 Popper and His Popular Critics

This volume examines Popper’s philosophy by analyzing the criticism of his most popular critics: Thomas Kuhn, Paul Feyerabend and Imre Lakatos. They all followed his rejection of the traditional view of science as inductive. Starting from the assumption that Hume’s criticism of induction is valid, the book explores the central criticism and objections that these three critics have raised. Their objections have met with great success, are significant and deserve paraphrase. One also may consider them reasonable protests against Popper’s high standards rather than fundamental criticisms of his philosophy. The book starts out with a preliminary discussion of some central background material and essentials of Popper’s philosophy. It ends with nutshell representations of the philosophies of Popper. Kuhn, Feyerabend and Lakatos. The middle section of the book presents the connection between these philosophers and explains what their central ideas consists of, what the critical arguments are, how they presented them, and how valid they are. In the process, the author claims that Popper's popular critics used against him arguments that he had invented (and answered) without saying so. They differ from him mainly in that they demanded of all criticism that it should be constructive: do not stop believing a refuted theory unless there is a better alternative to it. Popper hardly ever discussed belief, delegating its study to psychology proper; he usually discussed only objective knowledge, knowledge that is public and thus open to public scrutiny.