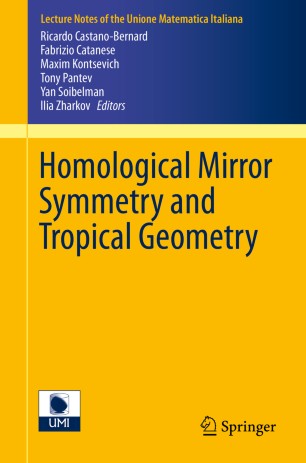 The relationship between Tropical Geometry and Mirror Symmetry goes back to the work of Kontsevich and Y. Soibelman (2000), who applied methods of non-archimedean geometry (in particular, tropical curves) to Homological Mirror Symmetry. In combination with the subsequent work of Mikhalkin on the “tropical” approach to Gromov-Witten theory, and the work of Gross and Siebert, Tropical Geometry has now become a powerful tool.
Homological Mirror Symmetry is the area of mathematics concentrated around several categorical equivalences connecting symplectic and holomorphic (or algebraic) geometry. The central ideas first appeared in the work of Maxim Kontsevich (1993). Roughly speaking, the subject can be approached in two ways: either one uses Lagrangian torus fibrations of Calabi-Yau manifolds (the so-called Strominger-Yau-Zaslow picture, further developed by Kontsevich and Soibelman) or one uses Lefschetz fibrations of symplectic manifolds (suggested by Kontsevich and further developed by Seidel). Tropical Geometry studies piecewise-linear objects which appear as “degenerations” of the corresponding algebro-geometric objects.