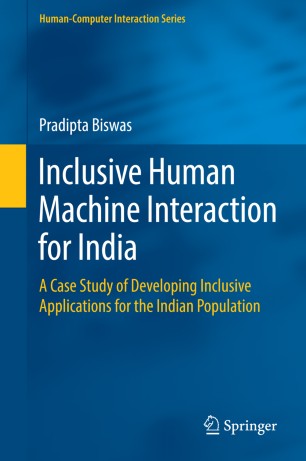 A Case Study of Developing Inclusive Applications for the Indian Population

Rapid advancement of interactive technologies during the past two decades has made access to information easier though at the expense of a clear digital divide. There is a generation who grew up with these technologies and another generation who find many modern electronic systems counter intuitive and have no use for them in their daily life. This digital divide becomes more prominent in developing countries as state-of-the-art interactive systems were not and are still not affordable to a large number of users.

Inclusive Human Machine Interaction for India presents an end-to-end case study of developing interactive technology for the common people of India. With a foreword from Prof Ashok Juhunjhunwala (Professor, Indian Institute of Technology Madras), this book investigates problems of middle-aged and elderly users in adopting interactive technologies and proposes new user interfaces and interaction techniques. It pioneers in introducing state-of-the-art eye-gaze tracking based interaction to everyday computing tasks and presents a detailed literature survey and user studies on user modelling and eye-gaze tracking. Technologies presented in this book will not only be relevant for developing countries but will also find useful applications in developed countries.