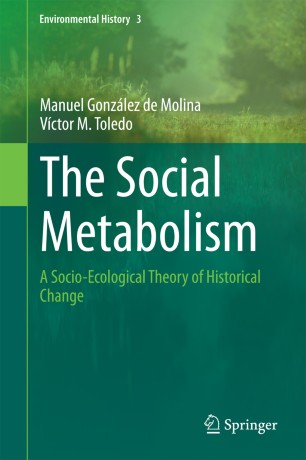 A Socio-Ecological Theory of Historical Change

Today, the most notable feature of the modern world is the growing concern for the future, since human society is immersed in a “giant, uncontrolled experiment” (McNeill, 2000), which it has caused, where natural and social processes are connected in an unprecedented way, generating new unpredictable and surprising dynamics and synergies that are threatening the human species, planetary equilibrium and the whole of life itself. Faced with the above situation, science as a whole is compelled to look back in order to learn from the past (lessons), and to adopt a rigorous historical perspective that will provide a thorough understanding of current situations from a socio-ecological perspective, capable of orchestrating interdisciplinary research into relations between society and nature.

Over this last decade, the concept of social metabolism has gained prestige as a theoretical instrument for the required analysis, to such an extent that there are now dozens of researchers, hundreds of articles and several books that have adopted and use this concept. However, there is a great deal of variety in terms of definitions and interpretations, as well as different methodologies around this concept, which prevents the consolidation of a unified field of new knowledge. The fundamental aim of the book is to conduct a review of the past and present usage of the concept of social metabolism, its origins and history, as well as the main currents or schools that exist around this concept. At the same time, the reviews and discussions included are used by the authors as starting points to draw conclusions and propose a theory of socio-ecological transformations.

The theoretical and methodological innovations of this book include: a. the rigorous definition of a basic model for the process of social metabolism; b. the distinction of two types of metabolic processes: tangible and intangible; c. detailed discussion regarding the concept of nature appropriation; d. analysis of the social metabolism at different scales (spatial dimension); e. historical analysis of the social metabolism (temporal dimension and socio-ecological change); f. overcoming the merely “systemic” or “cybernetic” nature of approaches, giving protagonism to collective action; and consequence and explanation of the above: g. integration of an ethical and political dimension to the theory.