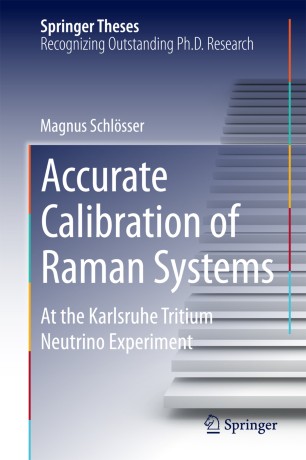 At the Karlsruhe Tritium Neutrino Experiment

Neutrinos can arguably be labeled as the most fascinating elementary particles known as their small but non-zero rest mass points to new mass generating mechanisms beyond the Standard Model, and also assigns primordial neutrinos from the Big Bang a distinct role in shaping the evolution of large-scale structures in the universe. The open question of the absolute neutrino mass scale will be addressed by the Karlsruhe Tritium Neutrino (KATRIN) experiment, currently under construction.
This thesis reports major contributions to developing and implementing new laser-spectroscopic precision tools to continuously monitor the isotope content of the windowless gaseous tritium source of KATRIN. The method of choice, Raman spectroscopy, is ideally suited for in-situ monitoring of all six hydrogen isotopologues. In a series of beautiful experiments the author obtained two independent novel calibration methods, first based on a comparison of experimental Raman depolarization ratios with corresponding quantum-chemical calculations, and second on a gas sampling technique. Both methods yield consistent cross-calibration results and, as well as yielding improvements in precision, will be of major importance in reducing systematic effects in long-term neutrino mass measurements. The methods developed in this thesis also have great potential to further broaden the applications of Raman spectroscopy to study extended sources such as in atmospheric physics.

Dr. Magnus Schlösser is an experimental physicist with research interests in optical spectroscopy and astroparticle physics. He graduated at the Karlsruhe Institute of Technology in 2009 and was awarded a PhD with distinction in 2013. The PhD project was conducted at the interface of his research interests by developing, characterising and calibrating a Raman system for the accurate measurement of the isotopic purity of the gaseous tritium source at the Karlsruhe Tritium Neutrino Experiment. During the time of the PhD studies he contributed to more than 10 scientific publications and has presented his work at international and national scientific conferences, as well as to the public. Currently, he is investigating further applications of optical spectroscopy for tritium process technology and beyond, with the aim of enhanced sensitivity, high versatility and long-term stability.