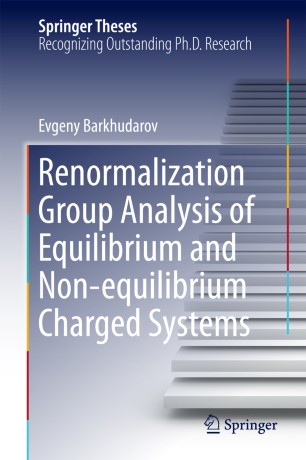 This thesis has two parts, each based on an application of the renormalization-group (RG). The first part is an analysis of the d-dimensional Coulomb gas. The goal was to determine if the Wilson RG could provide input into particle-in-cell simulations in plasma physics, which are the main family of simulation methods used in this field. The role of the RG was to identify the effect of coarse-graining on the coupling constants as a function of the cut-offs. The RG calculation reproduced established results, but in a more concise form, and showed the effect of the cut-offs on the Debye screening length.
The main part of the thesis is the application of the dynamic RG to turbulence in magnetohydrodynamics. After transformation to Elsasser variables, which is a symmetrisation of the original equations, the solution is presented as a functional integral, which includes stirring forces, their conjugates and functional Jacobian. The coarse-graining of the functional integral is represented as a diagrammatic expansion, followed by rescaling, and casting the results into differential equations for the analysis of RG trajectories. Detailed comparisons are made with the Navier-Stokes limit and with previous calculations for MHD.

Evgeny Barkhudarov studied physics at Imperial College London. Some of his earlier work was done with the Experimental Solid State group at Imperial, however towards the end of the undergraduate degree Evgeny specialized in theoretical physics. Upon completing his MSci in physics with theoretical physics he went on to do a PhD in the Condensed Matter Theory group of the physics department at Imperial College London under supervision of Prof. D. D. Vvedensky. To this day Evgeny is working on application of renormalization group to problems in mathematical physics.