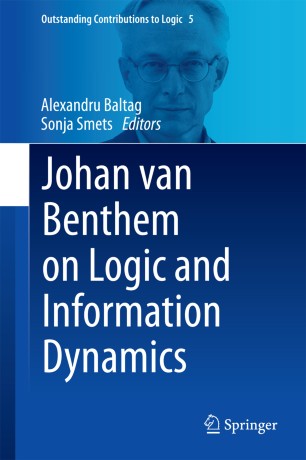 This book illustrates the program of Logical-Informational Dynamics. Rational agents exploit the information available in the world in delicate ways, adopt a wide range of epistemic attitudes, and in that process, constantly change the world itself. Logical-Informational Dynamics is about logical systems putting such activities at center stage, focusing on the events by which we acquire information and change attitudes. Its contributions show many current logics of information and change at work, often in multi-agent settings where social behavior is essential, and often stressing Johan van Benthem's pioneering work in establishing this program. However, this is not a Festschrift, but a rich tapestry for a field with a wealth of strands of its own. The reader will see the state of the art in such topics as information update, belief change, preference, learning over time, and strategic interaction in games. Moreover, no tight boundary has been enforced, and some chapters add more general mathematical or philosophical foundations or links to current trends in computer science.

The theme of this book lies at the interface of many disciplines. Logic is the main methodology, but the various chapters cross easily between mathematics, computer science, philosophy, linguistics, cognitive and social sciences, while also ranging from pure theory to empirical work. Accordingly, the authors of this book represent a wide variety of original thinkers from different research communities. And their interconnected themes challenge at the same time how we think of logic, philosophy and computation.

Thus, very much in line with van Benthem's work over many decades, the volume shows how all these disciplines form a natural unity in the perspective of dynamic logicians (broadly conceived) exploring their new themes today. And at the same time, in doing so, it offers a broader conception of logic with a certain grandeur, moving its horizons beyond the traditional study of consequence relations.

Alexandru Baltag is an Associate Professor at the Institute for Logic, Language and Computation (University of Amsterdam). He is known mostly for his work in logics for multi-agent information flow (– he was one of the originators of dynamic epistemic logic) and their applications to communication, game theory, epistemology etc. He also worked on non-wellfounded set theory, coalgebraic logic, logics for quantum computation, game semantics, learning theory. His MS in Mathematics was obtained in 1989 at the University of Bucharest. He received his PhD in Mathematics in 1998 at Indiana University under the supervision of Jon Barwise. Between 1998 and 2001, he was a post-doctoral researcher at the Dutch Center for Mathematics and Computer Science. Between 2001 and 2011 he was a University Lecturer at Oxford University, in the Department of Computer Science.

Sonja Smets is an associate professor at the Institute for Logic, Language and Computation at the University of Amsterdam. She obtained her PhD at the Free University of Brussels in 2001 and after a post-doctoral research position at the Flemish Fund for Scientific Research, she was a lecturer at the Free University of Brussels till 2009. In 2009 she worked as an assistant professor with a Rosalind Franklin Research Fellowship at both the Faculty of Philosophy (Dept. Theoretical Philosophy) and the Faculty of Mathematics & Natural Sciences (Multi-agent Systems Group in Artificial Intelligence) at the University of Groningen. In 2009, she received a VIDI award and in 2011 she received and ERC starters grant. Her research programme ranges over Logic (in particular non-classical logics, including non-monotonic logics, belief revision, modal and temporal logic, quantum logic); Multi-agent Systems; Formal Epistemology; Philosophy of Science, Philosophy of Quantum Physics, Quantum Information and Computation.

“The breadth and depth of coverage is such that there will be something of interest for many, whether you are a PhD student simply keen to absorb fascinating historical context set in a broad sweep of technical results--only some of which you may wish to engage with in detail--or an experienced logician looking to gain an appreciation of contemporary approaches to using logic to model a multitude of elements of reasoning mechanics.” (L. Sonenberg, Computing Reviews, February, 2015)