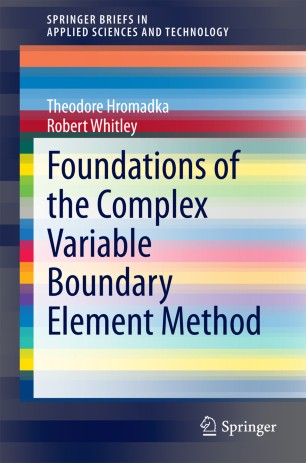 This book explains and examines the theoretical underpinnings of the Complex Variable Boundary Element Method (CVBEM) as applied to higher dimensions, providing the reader with the tools for extending and using the CVBEM in various applications. Relevant mathematics and principles are assembled and the reader is guided through the key topics necessary for an understanding of the development of the CVBEM in both the usual two- as well as three- or higher dimensions. In addition to this, problems are provided that build upon the material presented. The Complex Variable Boundary Element Method (CVBEM) is an approximation method useful for solving problems involving the Laplace equation in two dimensions. It has been shown to be a useful modelling technique for solving two-dimensional problems involving the Laplace or Poisson equations on arbitrary domains. The CVBEM has recently been extended to 3 or higher spatial dimensions, which enables the precision of the CVBEM in solving the Laplace equation to be now available for multiple dimensions. The mathematical underpinnings of the CVBEM, as well as the extension to higher dimensions, involve several areas of applied and pure mathematics including Banach Spaces, Hilbert Spaces, among other topics. This book is intended for applied mathematics graduate students, engineering students or practitioners, developers of industrial applications involving the Laplace or Poisson equations, and developers of computer modelling applications.

Dr. Theodore V. Hromadka, II is a Professor of Mathematics at the Department of Mathematical-Sciences at the United States Military Academy, West Point, New York. He has been Principal Engineer and Hydrologist for nearly 15 years at the consulting firm Hromadka & Associates in Rancho Santa Margarita, California. He holds several professional licenses, including Civil Engineer, Geoscientist, Geologist, and holds professional certifications as a Hydrologist for both surface water and groundwater. He has over 40 years of professional engineering experience and has served in various academic and research positions for over 35 years. His publications record includes 375 papers and over 20 books. He has authored more than 30 monographs that have been published by governmental agencies and he has prepared or directed the preparation of project reports and studies for over 1000 studies. He has served as Expert Witness in over 500 Superior Court matters, appearing in over 60 Court trials. He is a Diplomate of the American Academy of Water Resources Engineers and serves on the Board of Directors of the Wessex Institute of Technology in Great Britain. Dr. Hromadka also serves on the Advisory Board of the Department of Civil Engineering at the Untied States Military Academy at West Point. He is Professor Emeritus at the California State University, having served in the Departments of Mathematics, Environmental Studies and Geological Sciences.