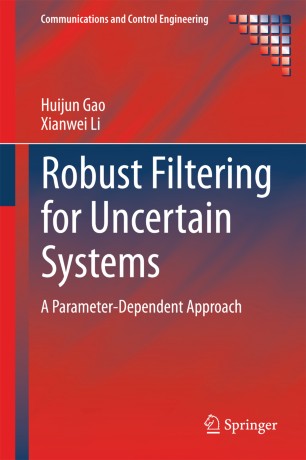 This monograph provides the reader with a systematic treatment of robust filter design, a key issue in systems, control and signal processing, because of the fact that the inevitable presence of uncertainty in system and signal models often degrades the filtering performance and may even cause instability. The methods described are therefore not subject to the rigorous assumptions of traditional Kalman filtering. The monograph is concerned with robust filtering for various dynamical systems with parametric uncertainties, and focuses on parameter-dependent approaches to filter design. Classical filtering schemes, like H2 filtering and H¥ filtering, are addressed, and emerging issues such as robust filtering with constraints on communication channels and signal frequency characteristics are discussed. The text features:

·        design approaches to robust filters arranged according to varying complexity level, and emphasizing robust filtering in the parameter-dependent framework for the first time;

·        guidance on the use of special realistic phenomena or factors to describe problems more accurately and to improve filtering performance;

·        demonstration of the techniques of matrix decoupling technique, the generalized Kalman‒Yakubovich‒Popov lemma, the free weighting matrix technique, and the delay modelling approach, in robust filtering;

·        an account of emerging issues on robust filtering for research to inspire future investigation.

Robust Filtering for Uncertain Systems will be of interest to academic researchers specializing in linear, robust and optimal control and estimation and to practitioners working in tracking and network control or signal filtering, detection and estimation. Graduate students learning control and systems theory, signal processing or applied mathematics will also find the book to be a valuable resource.

Professor Gao’s research interests include network-based control, robust control and filter theory, time-delay systems and their engineering applications. He has published more than 150 SCI-indexed papers in peer-reviewed international journals, and his publications have received more than 4000 citations with H-index 40 (web of science) and 10000 citations with H-index 56 (google scholar). He has received several academic and teaching awards, including the National Outstanding Doctoral Thesis Award in 2007 from the Ministry of Education of China, the National Natural Science Award of China in 2008, the Outstanding Teacher Award of Heilongjiang in 2009 from the Education Department of Heilongjiang Province, the Tan Kah Kee Young Scientist Award in 2012 from the Tan Kah Kee Young Science Foundation, the Distinguished Professor of Yangtze River Scholar in 2013 from Ministry of Education of China and the IEEE IES David Irwin Early Career Award in 2013 from the IEEE Industrial Electronics Society. He was a recipient of the Alberta Ingenuity Fellowship, the University of Alberta Dorothy J. Killam Memorial Postdoctoral Fellow Prize and Honorary Izaak Walton Killam Memorial Postdoctoral Fellowship in 2005 from the University of Alberta and a recipient of the National Outstanding Youth Science Fund in 2008.

“In order to help the reader to get a better understanding of the presented material, in each section there are included numerous algorithms associated to the theorems and tables summarizing the properties which appear in illustrative examples … . references are given at the end of each chapter … . The book is very dense in its content. … The book aims to offer the research engineers and graduate students an excellent tool.” (Dumitru Stanomir, zbMATH 1335.93001, 2016)