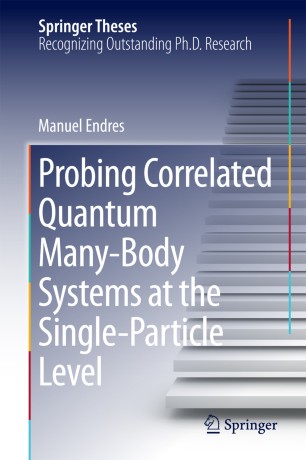 How much knowledge can we gain about a physical system and to what degree can we control it? In quantum optical systems, such as ion traps or neutral atoms in cavities, single particles and their correlations can now be probed in a way that is fundamentally limited only by the laws of quantum mechanics. In contrast, quantum many-body systems pose entirely new challenges due to the enormous number of microscopic parameters and their small length- and short time-scales.
This thesis describes a new approach to probing quantum many-body systems at the level of individual particles: Using high-resolution, single-particle-resolved imaging and manipulation of strongly correlated atoms, single atoms can be detected and manipulated due to the large length and time-scales and the precise control of internal degrees of freedom. Such techniques lay stepping stones for the experimental exploration of new quantum many-body phenomena and applications thereof, such as quantum simulation and quantum information, through the design of systems at the microscopic scale and the measurement of previously inaccessible observables.