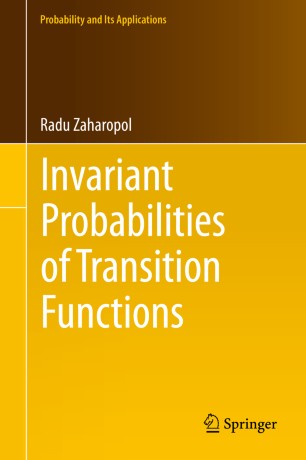 For transition functions that satisfy very general conditions the book describes an ergodic decomposition that provides relevant information on the structure of the corresponding set of invariant probabilities. Ergodic decomposition means a splitting of the state space, where the invariant ergodic probability measures play a significant role. Other topics covered include: characterizations of the supports of various types of invariant probability measures and the use of these to obtain criteria for unique ergodicity, and the proofs of two mean ergodic theorems for a certain type of transition functions.

The book will be of interest to mathematicians working in ergodic theory, dynamical systems, or the theory of Markov processes. Biologists, physicists and economists interested in interacting particle systems and rigorous mathematics will also find this book a valuable resource. Parts of it are suitable for advanced graduate courses. Prerequisites are basic notions and results on functional analysis, general topology, measure theory, the Bochner integral and some of its applications.

“The book is written with a high precision regarding definitions, notation, symbols and proofs. … The book may serve specialists as a comprehensive review of the topic. On the other hand, because it is so clearly written and almost self-contained, it can be recommended as a perfect primer for beginners. … The monograph is written for readers searching for an updated guide to functional methods of Markov (discrete- or continuous-time) processes.” (Wojciech Bartoszek, Mathematical Reviews, November, 2015)

“The present book is designed to provide a useful and complete presentation of the ergodic decomposition for transition functions defined on locally compact separable metric spaces. … The book is of great interest not only to research workers in the field of dynamical systems and the theory of Markov processes but also to scientists such as biologists, physicists, etc. who need relatively straightforward rigorous mathematical methods in their studies and research as well.” (Chryssoula Ganatsiou, zbMATH, Vol. 1302, 2015)
Buy options