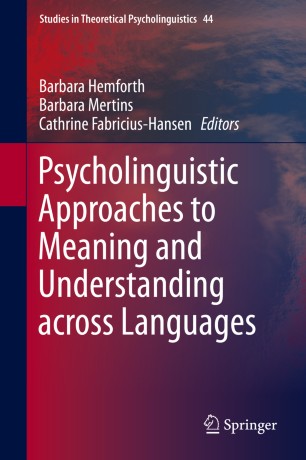 Psycholinguistic Approaches to Meaning and Understanding across Languages

Reports on joint work by researchers from different theoretical and linguistic backgrounds offer new insights on the interaction of linguistic code and context in language production and comprehension. This volume takes a genuinely cross-linguistic approach integrating theoretically well-founded contrastive descriptions with thorough empirical investigations. Authors answer questions on the topic of how we ‘encode’ complex thoughts into linguistic signals and how we interpret such signals in appropriate ways.

Chapters combine on- and off-line empirical methods varying from large-scale corpus analyses over acceptability judgements, sentence completion studies, and reading time experiments. The authors shed new light on the central questions related to our everyday use of language, especially the problem of how we construe meaning in and through language in general as well as through the means provided by particular languages.

​“Language is there to construct meaning. But languages are different -- in their lexicon, in their morphosyntax, also in their ways of constructing discourse and in the extent to which they rely on implicit knowledge and on conversational rules. So, what does this tell us about the meanings constructed by language? Are they the same (as, for example, the two number expressions "1989" and "MCMLXXXIX" mean the same) -- or are they different, due to the way how meanings are constructed? This edited volume provides an ingenious way to discuss differences how meanings are constructed, by focusing on narrowly described phenomena and contrasting two languages per article. It seeks evidence for these differences not only from intuition of speakers and from linguistic corpora, but primarily from experimental studies. Thus, it provides an important contribution of our understanding what linguistic meaning is.” Manfred Krifka, Humboldt-Universität, Berlin & Zentrum für Allgemeine Sprachwissenschaft (ZAS), Berlin