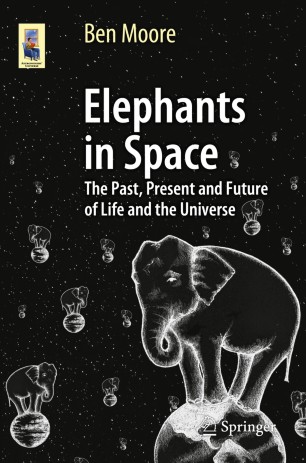 The Past, Present and Future of Life and the Universe

This book is about the history and future of life and the universe, written at a level that any educated lay-person can understand and enjoy. It describes our place in time and space, how we got here and where we are going. It will take you on a journey from the beginning of time to the end of the universe to uncover our origins and reveal our destiny. It will explain how mankind acquired this knowledge starting from the beginning of civilization when the ancient Greeks first began to ask questions about the nature of the world around them.

Ben Moore takes us on a path of discovery that connects astrophysics with subjects as varied as biology, neuroscience and evolution; from the origin of atoms to how stars shine and die, from ants and elephants to space travel and extra-terrestrial life. But as our universe grows older and its stars fade away and stop shining, can life continue for eternity or is all life destined for complete extinction? And what is the purpose of all of this anyway?!

On the German edition:
"With his public talks and his new book "Elefanten im All" the Brit is on his way of becoming a popstar of science. Moore has a story to tell. The story of everything. From the beginning to the end of our existence. And he does so with esprit and catching passion." Rico Bandle, Weltwoche, 1. November 2012

“The kind of book you come across only every few years.” Artur K. Vogel, Der Bund, September 2012

Ben Moore (*1966) is Professor of Astrophysics at the University of Zurich, Switzerland and has authored over 200 scientific papers ranging from the origins of planets and galaxies to dark matter and dark energy. A British citizen, he gained his PhD from the University of Durham and spent several years as a research fellow in the United States of America. Moore's research group at the University of Zurich's Institute for Theoretical Physics simulates the universe using custom built supercomputers. Under his artist name "Professor Moore", he plays guitars with the electro-rock band Milk67 and is currently working on a solo album. He has also organised and played on a love-mobile during the 2010 Zurich Street Parade. Moore has been living in Switzerland for the past 10 years, where apart from his music he enjoys mountaineering, snowboarding and an occasional game of Quake.

“If you're looking for an all-encompassing read about the Universe, then ‘Elephants in Space’ is a good start. … this book is basically a crash course in the history of the Universe, starting with how scientists theorize the Universe went from a tiny speck to the size it is now and what happened in-between and what will happen in the future. … ‘Elephants in Space’ was a very enjoyable and interesting read.” (Kadri Tinn, AstroMadness.com, October, 2015)

“Elephants in Space presents a grand overview of just about everything, focusing on life on Earth and possible life elsewhere in the universe. … The book is geared to the science novice, and the author discusses topics as far reaching as dark matter, evolution, and ant behavior and even devotes a few words to elephant brains. … Summing Up: Recommended. General readers and lower-division undergraduates.” (J. F. Burkhart, Choice, Vol. 52 (7), March, 2015)