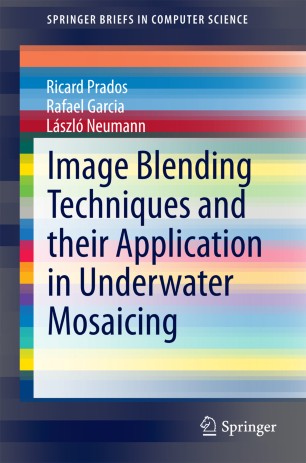 Image Blending Techniques and their Application in Underwater Mosaicing

Underwater surveys have numerous scientific applications, and optical imaging by underwater vehicles can provide high-resolution visual information of the ocean floor. However, the particular challenges of the underwater medium, such as light attenuation, require the imaging to be performed as close to the seabed as possible. Hence, optically mapping large seafloor areas can only be achieved by building image mosaics from a set of reduced-area pictures. Unfortunately, the seams along image boundaries are often noticeable, requiring image blending, the merging step in which these artifacts are minimized. Yet processing tools and bottlenecks have restricted underwater photo-mosaics to small areas despite the hundreds of thousands of square meters that modern surveys can cover.

This work proposes strategies and solutions to tackle the problem of building photo-mosaics of very large underwater optical surveys, presenting contributions to the image preprocessing, enhancing and blending steps, and resulting in an improved visual quality of the final photo-mosaic.

The text opens with a comprehensive review of mosaicing and blending techniques, before proposing an approach for large scale underwater image mosaicing and blending. In the image preprocessing step, a depth dependent illumination compensation function is used to solve the non-uniform illumination appearance due to light attenuation. For image enhancement, the image contrast variability due to different acquisition altitudes is compensated using an adaptive contrast enhancement based on an image quality reference selected through a total variation criterion. In the blending step, a graph-cut strategy operating in the image gradient domain over the overlapping regions is suggested. Next, an out-of-core blending strategy for very large scale photo-mosaics is presented and tested on real data. Finally, the performance of the approach is evaluated and compared with other approaches.