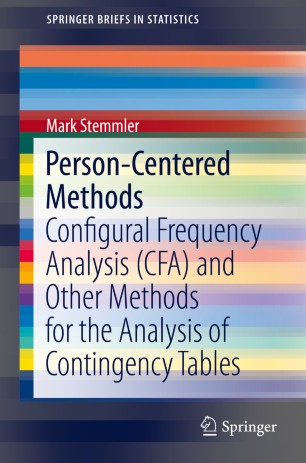 This book takes an easy-to-understand look at the statistical approach called the person-centered method. Instead of analyzing means, variances and covariances of scale scores as in the common variable-centered approach, the person-centered approach analyzes persons or objects grouped according to their characteristic patterns or configurations in contingency tables. The main focus of the book will be on Configural Frequency Analysis (CFA; Lienert and Krauth, 1975) which is a statistical method that looks for over and under-frequented cells or patterns. Over frequented means that the observations in this cell or configuration are observed more often than expected, under-frequented means that this cell or configuration is observed less often than expected. In CFA a pattern or configuration that contains more observed cases than expected is called a type; similarly, a pattern or configuration that is less observed than expected are called an antitype. CFA is similar to log-linear modeling. In log-linear modeling the goal is to come up with a fitting model including all important variables. Instead of fitting a model, CFA looks at the significant residuals of a log-linear model.

The book describes the use of an R-package called confreq (derived from Configural Frequency Analysis). The use of the software package is described and demonstrated with data examples.