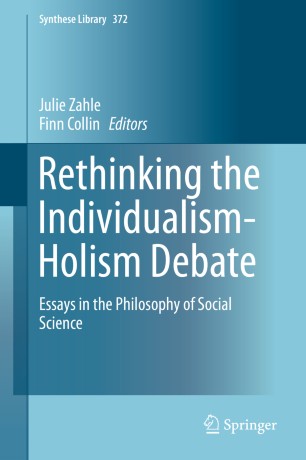 Essays in the Philosophy of Social Science

This collection of papers investigates the most recent debates about individualism and holism in the philosophy of social science. The debates revolve mainly around two issues: firstly, whether social phenomena exist sui generis and how they relate to individuals. This is the focus of discussions between ontological individualists and ontological holists. Secondly, to what extent social scientific explanations may, and should, focus on individuals and social phenomena respectively. This issue is debated amongst methodological holists and methodological individualists.

In social science and philosophy, both issues have been intensively discussed and new versions of the dispute have appeared just as new arguments have been advanced. At present, the individualism/holism debate is extremely lively, and this book reflects the major positions and perspectives within the debate. This  volume is also relevant to debates about two closely related issues in social science: the micro-macro debate and the agency-structure debate.

This book presents contributions from key figures in both social science and philosophy, in the first such collection on this topic to be published since the 1970s.