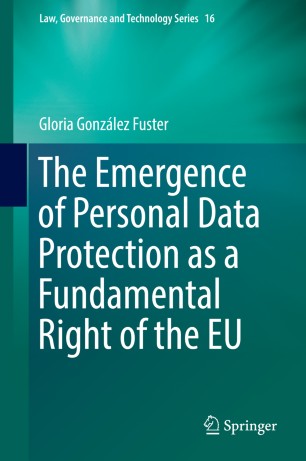 This book explores the coming into being in European Union (EU) law of the fundamental right to personal data protection. Approaching legal evolution through the lens of law as text, it unearths the steps that led to the emergence of this new right. It throws light on the right’s significance, and reveals the intricacies of its relationship with privacy.

The right to personal data protection is now officially recognised as a EU fundamental right. As such, it is expected to play a critical role in the future European personal data protection legal landscape, seemingly displacing the right to privacy. This volume is based on the premise that an accurate understanding of the right’s emergence is crucial to ensure its correct interpretation and development.

Key questions addressed include: How did the new right surface in EU law? How could the EU Charter of Fundamental Rights claim to render ‘more visible’ an invisible right? And how did EU law allow for the creation of a new right while ensuring consistency with existing legal instruments and case law?

The book first investigates the roots of personal data protection, studying the redefinition of privacy in the United States in the 1960s, as well as pioneering developments in European countries and in international organisations. It then analyses the EU’s involvement since the 1970s up to the introduction of legislative proposals in 2012. It grants particular attention to changes triggered in law by language and, specifically, by the coexistence of languages and legal systems that determine meaning in EU law. Embracing simultaneously EU law’s multilingualism and the challenging notion of the untranslatability of words, this work opens up an inspiring way of understanding legal change.

This book will appeal to legal scholars, policy makers, legal practitioners, privacy and personal data protection activists, and philosophers of law, as well as, more generally, anyone interested in how law works.

“Fuster’s book provides a compendious elucidation of the history of European data protection … . Such a comprehensive perspective in a medium-length monograph will undoubtedly be of enormous benefit to both researchers and advanced students of data protection. … It tackles an extremely important issue, is meticulously researched, and is genuinely thought-provoking and enlightening. It will constitute an essential point of reference in the growing field of data-protection scholarship for many years to come.” (David Erdos, The Cambridge Law Journal, Vol. 74, July, 2015)