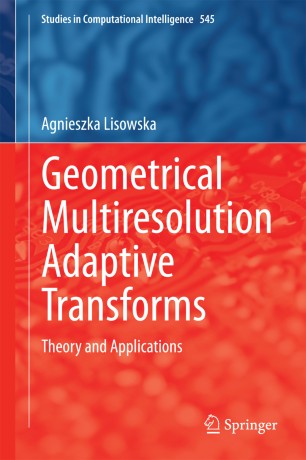 Modern image processing techniques are based on multiresolution geometrical methods of image representation. These methods are efficient in sparse approximation of digital images. There is a wide family of functions called simply ‘X-lets’, and these methods can be divided into two groups: the adaptive and the nonadaptive. This book is devoted to the adaptive methods of image approximation, especially to multismoothlets.

Besides multismoothlets, several other new ideas are also covered. Current literature considers the black and white images with smooth horizon function as the model for sparse approximation but here, the class of blurred multihorizon is introduced, which is then used in the approximation of images with multiedges. Additionally, the semi-anisotropic model of multiedge representation, the introduction of the shift invariant multismoothlet transform and sliding multismoothlets are also covered.

Geometrical Multiresolution Adaptive Transforms should be accessible to both mathematicians and computer scientists. It is suitable as a professional reference for students, researchers and engineers, containing many open problems and will be an excellent starting point for those who are beginning new research in the area or who want to use geometrical multiresolution adaptive methods in image processing, analysis or compression.

Agnieszka Lisowska is an assistant professor at the Institute of Computer Science, University of Silesia, where in 2006 she obtained her PhD with distinctions in the area of geometrical wavelets in Computer Science. In 2001 she completed her MSc in Mathematics at the same university. Her scientific research is concentrated on sparse representations and geometrical multiresolution methods of image processing. She invented smoothlets and multismoothlets, and the fast methods of their computations. She is the author of several journal and conference papers published among others by Springer, Elsevier or IEEE.

“The book is divided into two parts. The first part is devoted to the theory of multismoothlets. … The second part of the book is devoted to applications of the presented transforms. … The author gives many examples presenting the notations and problems considered, so it makes the learning easier. It is suitable for students, researchers and engineers interested in multiresolution representation of images and its applications.” (Krzystof Gdawiec, zbMATH, Vol. 1297, 2014)