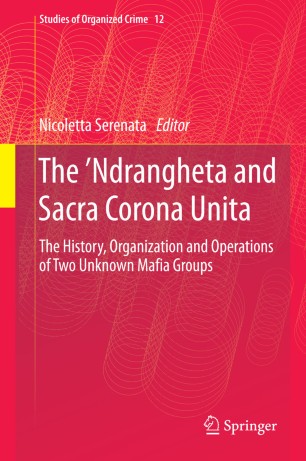 The ’Ndrangheta and Sacra Corona Unita

The History, Organization and Operations of Two Unknown Mafia Groups

This book covers two lesser known but important Italian Mafia groups: the ’Ndrangheta and the Sacra Corona Unita. Italian criminal organizations, in particular Mafia, are one of the most commonly researched organized crime groups, usually focusing on the Sicilian Mafia, Cosa Nostra, or the Neapolitan Mafia, Camorra. However, Italy has other two other Mafias, one in Apulia, Sacra Corona Unita, and the other in Calabria, ’Ndrangheta.

Although an extensive literature is available on Cosa Nostra and Camorra, less is known about the other two organizations, particularly their operations in the United States. Territory is one of the most important elements in the Mafia because the criminal organization operates its signoria territoriale, controlling every illegal activity in its sphere of action. This territorial power goes beyond the Italian boundaries reaching the United States of America and other non-European countries, with the mere aim of developing their drug/weapon trafficking and money laundering businesses. Mafia, therefore, is not a uniquely Italian phenomenon as it might appear, but a worldwide one, affecting many societies and economies.

This unique volume provides new information about the ’Ndrangheta and Sacra Corona Unita written by an interdisciplinary group of Italian scholars. It covers organizational, hierarchic, and operative aspects: that is, the role that they have in politics, in their own families, in business relations in Italy and abroad. It also highlights the particular role that Cosa Nostra and Camorra had in their development. This work will be of interest to criminology researchers studying organized crime, corruption, money laundering and trafficking, as well as researchers from related fields, such as political science, economics, and international relations.

Nicoletta Serenata is a Lecturer of Italian Studies at Auburn University in Alabama, with a research focus on the Italian mafia, also holding a Masters in Communication from University of Rome, Italy. Coming from southern Italy, she has been focusing her research interest in criminal organizations, in particular less studied Mafia organizations: the Sacra Corona Unita and the ’Ndrangheta.