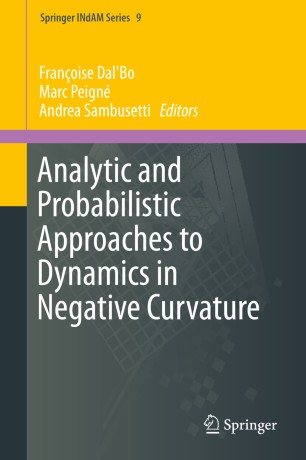 Analytic and Probabilistic Approaches to Dynamics in Negative Curvature

The work of E. Hopf and G.A. Hedlund, in the 1930s, on transitivity and ergodicity of the geodesic flow for hyperbolic surfaces, marked the beginning of the investigation of the statistical properties and stochastic behavior of the flow. The first central limit theorem for the geodesic flow was proved in the 1960s by Y. Sinai for compact hyperbolic manifolds. Since then, strong relationships have been found between the fields of ergodic theory, analysis, and geometry. Different approaches and new tools have been developed to study the geodesic flow, including measure theory, thermodynamic formalism, transfer operators, Laplace operators, and Brownian motion. All these different points of view have led to a deep understanding of more general dynamical systems, in particular the so-called Anosov systems, with applications to geometric problems such as counting, equirepartition, mixing, and recurrence properties of the orbits.

This book comprises two independent texts that provide a self-contained introduction to two different approaches to the investigation of hyperbolic dynamics. The first text, by S. Le Borgne, explains the method of martingales for the central limit theorem. This approach can be used in several situations, even for weakly hyperbolic flows, and the author presents a good number of examples and applications to equirepartition and mixing. The second text, by F. Faure and M. Tsujii, concerns the semiclassical approach, by operator theory: chaotic dynamics is described through the spectrum of the associated transfer operator, with applications to the asymptotic counting of periodic orbits.

The book will be of interest for a broad audience, from PhD and Post-Doc students to experts working on geometry and dynamics.