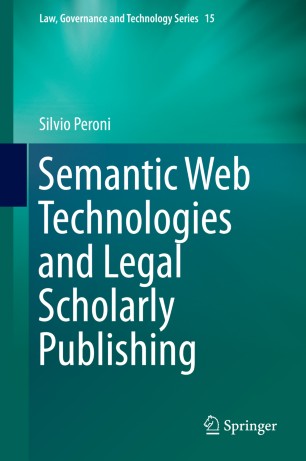 This work deals with the applications of Semantic Publishing technologies in the legal domain, i.e., the use of Semantic Web technologies to address issues related to the Legal Scholarly Publishing. Research in the field of Law has a long tradition in the application of semantic technologies, such as Semantic Web and Linked Data, to real-world scenarios. This book investigates and proposes solutions for three main issues that Semantic Publishing needs to address within the context of the Legal Scholarly Publishing: the need of tools for linking document text to a formal representation of its meaning; the lack of complete metadata schemas for describing documents according to the publishing vocabulary; and the absence of effective tools and user interfaces for easily acting on semantic publishing models and theories.

In particular, this work introduces EARMARK, a markup metalanguage that allows one to create markup documents without the structural and semantic limits imposed by markup languages such as XML. EARMARK is a platform to link the content layer of a document with its intended formal semantics, and it can be used with the Semantic Publishing and Referencing (SPAR) Ontologies, another topic in this book. SPAR Ontologies are a collection of formal models providing an upper semantic layer for describing the publishing domain. Using EARMARK as a foundation for SPAR descriptions opens up to a semantic characterisation of all the aspects of a document and of its parts. Finally, four user-friendly tools are introduced: LODE, KC-Viz, Graffoo and Gaffe. They were expressly developed to facilitate the interaction of publishers and domain experts with Semantic Publishing technologies by shielding such users from the underlying formalisms and semantic models of such technologies.