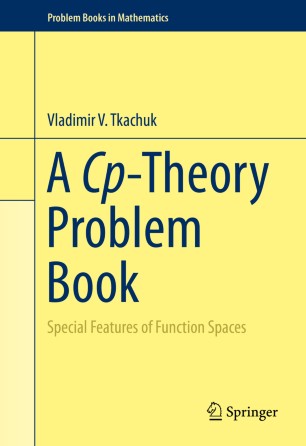 The books in Vladimir Tkachuk’s A Cp-Theory Problem Book series will be the ‘go to’ texts for basic reference to Cp-theory. This second volume, Special Features of Function Spaces, gives a reasonably complete coverage of Cp-theory, systematically introducing each of the major topics and providing  500 carefully selected problems and exercises with complete solutions. Bonus results and open problems are also given. The text is designed to bring a dedicated reader from basic topological principles to the frontiers of modern research covering a wide variety of topics in Cp-theory and general topology at the professional level.

The first volume, Topological and Function Spaces © 2011, provided an introduction from scratch to Cp-theory and general topology, preparing the reader for a professional understanding of Cp-theory in the last section of its main text. This second volume continues from the first, and can be used as a textbook for courses in both Cp-theory and general topology as well as a reference guide for specialists working in Cp-theory and related topics.  Additionally, the material can also be considered as an introduction to advanced set theory and descriptive set theory, presenting diverse topics of the theory of function spaces with the topology of pointwise convergence, or Cp-theory which exists at the intersection of topological algebra, functional analysis and general topology.

From the Reviews of Topological and Function Spaces: “…It is designed to bring a dedicated reader from the basic topological principles to the frontiers of modern research. Any reasonable course in calculus covers everything needed to understand this book. This volume can also be used as a reference for mathematicians working in or outside the field of topology (functional analysis) wanting to use results or methods of Cp-theory...On the whole, the book provides a useful addition to the literature on Cp-theory, especially at the instructional level." (Mathematical Reviews)

Vladimir V. Tkachuk is a professor in the Department of Mathematics of Autonomous Metropolitan University in Mexico City. He holds a PhD from Moscow State University and is the author of "A Cp-Theory Problem Book: Topological and Function Spaces" (Springer, 2011).

“This is a well-written and very interesting book from several points of view and can be used as a textbook for courses in both Cp-theory and general topology as well as a reference guide for specialists working in Cp-theory and related topics. … I hope that this book becomes the right hand of students and researchers in mathematics.” (Dimitrios N. Georgiou, Mathematical Reviews, May, 2015)

“This volume, devoted to special properties of function spaces, is divided into four chapters … . The concise beginning of each section contains definitions of topics used in that section. … this problem book will become one of the table books for all researchers interested in Cp-theory and its relations with other fields of mathematics.” (Ljubiša D. Kočinac, zbMATH, Vol. 1303, 2015)
Buy options