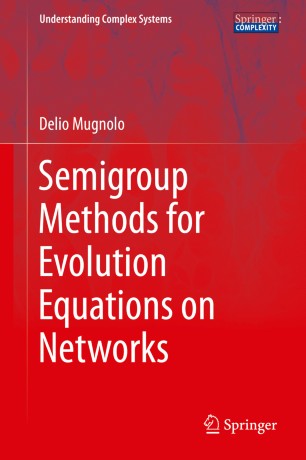 This concise text is based on a series of lectures held only a few years ago and originally intended as an introduction to known results on linear hyperbolic and parabolic equations.  Yet the topic of differential equations on graphs, ramified spaces, and more general network-like objects has recently gained significant momentum and, well beyond the confines of mathematics, there is a lively interdisciplinary discourse on all aspects of so-called complex networks. Such network-like structures can be found in virtually all branches of science, engineering and the humanities, and future research thus calls for solid theoretical foundations.

This book is specifically devoted to the study of evolution equations – i.e., of time-dependent differential equations such as the heat equation, the wave equation, or the Schrödinger equation (quantum graphs) – bearing in mind that the majority of the literature in the last ten years on the subject of differential equations of graphs has been devoted to elliptic equations and related spectral problems. Moreover, for tackling the most general settings - e.g. encoded in the transmission conditions in the network nodes - one classical and elegant tool is that of operator semigroups. This book is simultaneously a very concise introduction to this theory and a handbook on its applications to differential equations on networks.
With a more interdisciplinary readership in mind, full proofs of mathematical statements have been frequently omitted in favor of keeping the text as concise, fluid and self-contained as possible. In addition, a brief chapter devoted to the field of neurodynamics of the brain cortex provides a concrete link to ongoing applied research.

“The book under review uses an operator theoretical approach to study dynamical processes in networks. … The book is aimed at researchers and graduate students having some general knowledge in operator theory. … We believe that it can serve as a textbook for a graduate course, as well as a comprehensive handbook for researchers in the field.” (Marjeta Kramar Fijavž, zbMATH 1306.47001, 2015)