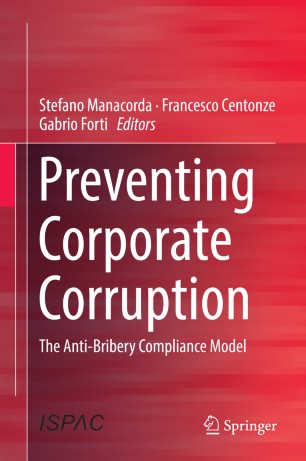 This book presents the results of a two-year international research project conducted by five academic institutions, under the co-ordination of ISPAC, in co-operation with the United Nations Office on Drugs and Crime (UNDOC) to investigate and provide solutions for reducing bribery and corruption in corporations and institutions. It starts with an empirical case study on the effectiveness of a set of self-regulation rules adopted by multinational companies in the energy sector. Second, it explores the relationships between domestic criminal law and self-regulation. Third, it examines guidelines for the adoption of compliance programs developed by international institutions, to serve as models for the future.

The principle result of the book is a three-pronged Anti-Bribery Compliance Model (so called ABC Model), intended as a corruption prevention tool to be adopted by private corporations. It provides a common, research-based standard for anti-bribery compliance programs, with international applications.

This book will be of interest to researchers studying Criminology and Criminal Justice, particularly in the areas of organized crime and corruption, as well as related areas like Business Ethics and Comparative International Law.

Stefano Manacorda (BA University of Naples; LLM Université Paris 1 Panthéon Sorbonne; PhD University of Florence), is a professor of Criminal Law at the University of Naples, associated at the Ecole de Droit de la Sorbonne - Université Paris 1 and director of the research team “Internormativities in Criminal Law” at the Collège de France. He is Vice-President of SIDS (Société internationale de Défense sociale), of ARPE (Association de Recherches Pénales Européennes) of ISPAC (International Scientific and Professional Advisory Council of the United Nations Crime Prevention and Criminal Justice Programme). He has published extensively in the fields of European, Comparative and International Criminal Law. He is the author of more than one hundred scientific articles in several languages and has published eleven books in the area of European, International and Comparative Law.