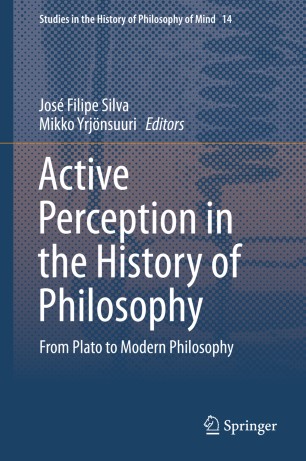 Active Perception in the History of Philosophy

From Plato to Modern Philosophy

Part of the Studies in the History of Philosophy of Mind book series (SHPM, volume 14)

The aim of the present work is to show the roots of the conception of perception as an active process, tracing the history of its development from Plato to modern philosophy. The contributors inquire into what activity is taken to mean in different theories, challenging traditional historical accounts of perception that stress the passivity of percipients in coming to know the external world. Special attention is paid to the psychological and physiological mechanisms of perception, rational and non-rational perception, and the role of awareness in the perceptual process.

Perception has often been conceived as a process in which the passive aspects - such as the reception of sensory stimuli - were stressed and the active ones overlooked. However, during recent decades research in cognitive science and philosophy of mind has emphasized the activity of the subject in the process of sense perception, often associating this activity to the notions of attention and intentionality.  Although it is recognized that there are ancient roots to the view that perception is fundamentally active, the history remains largely unexplored.

The book is directed to all those interested in contemporary debates in the fields of philosophy of mind and cognitive psychology who would like to become acquainted with the historical background of active perception, but for historical reliability the aim is to make no compromises.

“The volume consists of three sets of papers: one on ancient, one on medieval, and one on early modern philosophy. … this book is a valuable source for students and scholars interested in the history of philosophical psychology. Most of the papers are accessible to a broad audience. Many of the contributors interestingly qualify the idea that there is a clear-cut distinction to be made between passive and active accounts of perception.” (Han Thomas Adriaenssen, Notre Dame Philosophical Reviews, October, 2014)