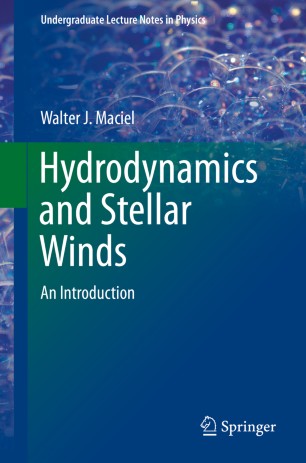 Stellar winds are a common phenomenon in the life of stars, from the dwarfs like the Sun to the red giants and hot supergiants, constituting one of the basic aspects of modern astrophysics. Stellar winds are a hydrodynamic phenomenon in which circumstellar gases expand towards the interstellar medium. This book presents an elementary introduction to the fundamentals of hydrodynamics with an application to the study of stellar winds. The principles of hydrodynamics have many other applications, so that the book can be used as an introduction to hydrodynamics for students of physics, astrophysics and other related areas.

Walter Junqueira Maciel was born in Cruzília, MG, Brazil. He graduated in Physics at UFMG (Minas Gerais Federal University), in Belo Horizonte, and obtained a masters degree at ITA (Aeronautics Technological Institute), São José dos Campos, and a PhD at São Paulo University. He did several internships in Groningen, the Netherlands, and in Heidelberg, Germany. He is a full professor in the Astronomy Department at the Astronomical and Geophysical Institute, São Paulo University, where he has been working since 1974. He was the head of the department between 1992 and 1994. He has published over a hundred scientific papers in international journals and around fifty papers (science, education, and outreach) in national journals. He is the author of the book “Introduction to Stellar Structure and Evolution”(Edusp, 1999), which won the Jabuti Prize in 2000 in the field of exact sciences, technology, and computer sciences, and of the book “Astrophysics of the Interstellar Medium” (Springer, 2013).