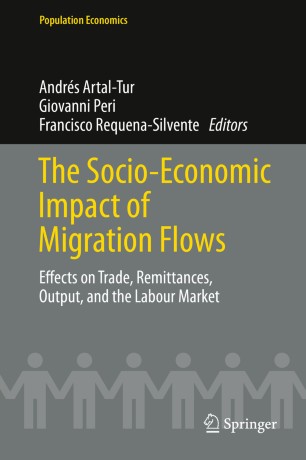 The Socio-Economic Impact of Migration Flows

Effects on Trade, Remittances, Output, and the Labour Market

Though globalisation of the world economy is currently a powerful force, people’s international mobility appears to still be very limited. The goal of this book is to improve our knowledge of the true effects of migration flows. It includes contributions by prominent academic researchers analysing the socio-economic impact of migration in a variety of contexts: interconnection of people and trade flows, causes and consequences of capital remittances, understanding the macroeconomic impact of migration, and the labour market effects of people’s flows. The latest analytical methodologies are employed in all chapters, while interesting policy guidelines emerge from the investigations. The style of the volume makes it accessible for both non-experts and advanced readers interested in this hot topic of today’s world.

Prof. Andres Artal-Tur gained a PhD in Economics at University of Valencia (Spain), with actual position at Technical University of Cartagena (Spain). His main research interest is on International Economics (international trade, FDI and migration flows), with an extension to Development Economics. He has visited several European, MENA and Latin American universities, publishing research findings on relevant journals and policy-oriented reviews. His current research interest focuses on the impact and opportunities opened by the Arab Spring for the EU-MENA space.

Prof. Giovanni Peri is Professor of Economics at the University of California, Davis and a Research Associate of the National Bureau of Economic Research in Cambridge, Massachusetts. He is Editor of “Regional Science and Urban Economics” and in the editorial Board of five Academic Journals in Economics. He has done research on Human Capital, Growth and Technological Innovation. More recently he has focused on the impact of international migrations on labor markets, housing markets and productivity. He has published in several academic journals including the American Economic Review, Review of Economic Studies, The Review of Economics and Statistics and the Journal of European Economic Association. He received several grants for the study of the impact of migrations from the University of California, John D. and Catherine T. MacArthur Foundation, from the World Bank, from the Volkswagen Foundation and from Microsoft Corporation. He holds a Ph.D. in Economics from U.C. Berkeley and a Doctoral Degree in Economics from Bocconi University, Milano, Italy.

Prof. Francisco Requena-Silvente graduated from the University of Valencia (Spain) and gained an MSc in Economics at University College London. He completed his PhD at the London School of Economics. Before joining the University of Sheffield as a Reader in Economics, he was Lecturer in Economics at the University of Valencia. His research interests are in applied international trade: testing the performance of the traditional comparative advantage models and of the new trade models; measuring the importance of trade barriers (i.e. the so-called border effect) and evaluating the importance of formal and informal networks to facilitate international trade. His current research agenda focuses on the role of ethnic and business institutions on international and interregional trade. He has published extensively in relevant economic journals.