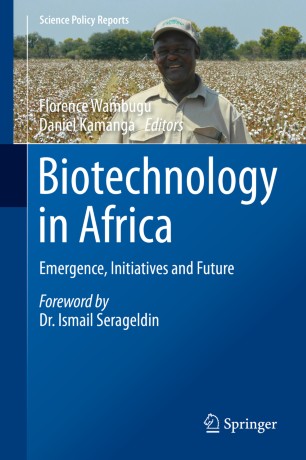 In this book, Florence Wambugu and Daniel Kamanga of Africa Harvest Biotech Foundation International bring together expert African authorities to critique various biotechnology initiatives and project future developments in the field in Africa. For the first time, African voices from multidisciplinary fields as diverse as economics, agriculture, biotechnology, law, politics, and academia, demand to be allowed to set the continent’s biotech development agenda. This book argues that there is a great future for biotechnology in Africa which sidesteps western interests that do not match those of the local populace. In these diverse chapters, Africa’s political and scientific leaders demand a greater say in how research and development funds are allocated and spent. They argue that Africa’s political leaders must see both clear benefits and have elbow-room to drive the change required. This is the way that African governments can employ workable policies, suitable biosafety legislation and regulation, and respond effectively to public-private partnerships. Wambugu and Kamanga show that biotechnology has the potential to improve food security and standard of living as well as mitigate the detrimental effects of climate change on the African continent.

Dr. Florence Wambugu is the Founder, Director and Chief Executive Officer of Africa Harvest Biotech Foundation International (AHBFI) from 2002 to the present. She is a renowned plant pathologist who is dedicated to fighting hunger, poverty and malnutrition in Africa. She has made significant contributions in research, development and improved production in maize, pyrethrum, banana, sweet potato, sorghum and forestry in Kenya and Africa. She received her Bachelor of Science in botany from the University of Nairobi, her Master's in pathology from North Dakota State University and her PhD from the University of Bath. Her three-year post-doctoral work in the USA was funded by Monsanto. She is the recipient of the Kenya Agricultural Research Institute's (KARI) 1989 Crop Science Award for outstanding scientist of the year. She received the World Bank Global Development Network Award in 2000 for successful introduction of the tissue-culture banana in Kenya and also won the Woman of the Year Award by Eve Magazine that year. She is the author and publisher of Modifying Africa: How Biotechnology Can Benefit the Poor. Her transformational work in Africa has been featured in one of the highly viewed BBC documentaries called Jimmy Global Farm. Amongst her international speaking engagements, Dr. Wambugu was one of the key guest speakers during the 2009 Heads of Government of the Commonwealth meeting in Port of Spain, Trinidad and Tobago. Recently she was presented to Queen Elizabeth in recognition of her significant contribution in science, technology and society. She is recipient of numerous local and international honours, awards and grants with the most recent being the Yara Prize Award given by the Norway-based Yara Foundation in recognition of her advocacy of biotechnology to increase food production in Africa. Dr. Wambugu has served as a board member for international institutions, which include Private Sector Committee of CGIAR, United Nations Millennium Development goals Hunger task force and currently, she is serving as a Council Member of the Japan Science and Technology in Society (STS) Forum, a member of the Global Agenda Council on food Security of the World Economic Forum (WEF), a member of the Science Board, Grand Challenges for Global Health (GCGH), and Bill and Melinda Gates Foundation and a Steering Committee Member of the European Action on Global Life Sciences (EAGLES).