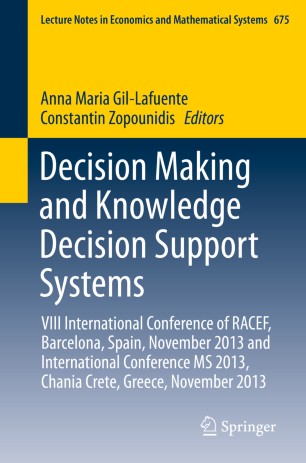 This book presents recent advancements of research, new methods and techniques, applications and projects in decision making and decision support systems. It explores expert systems and neural networks, knowledge engineering and management, fuzzy sets and systems and computational methods for optimization, data analysis and decision making. It presents applications in Economics, Finance, Management and Engineering. The book undertakes to stimulate scientific exchange, ideas and experiences in the field of decision making in Economy and Management. Researchers and practitioners alike will benefit from this book, when they are dealing with imprecision, vagueness and uncertainty in the context of decision making.

Anna-Maria Gil-Lafuente is a Full Professor at the University of Barcelona. She holds a Master and a PhD degree in Business Administration from the University of Barcelona. She has published more than 450 publications in journals, books and conference proceedings. She has also published several books including two volumes in the Springer book series "Studies in Fuzziness and Soft Computing". She is co-editor in chief of the 8 international journals that are published by the AMSE organization and the "Journal of Computational Optimization in Economics and Finance". She has participated in a wide range of scientific committees and as a reviewer in international journals. She is academician of the Royal Academy of Economics and Financial Sciences of Spain, the Royal Academy of Doctors of Spain and the Academy Delphinale of France.

In recognition of his scientific work, he has received several awards from international research societies. in 1996 he received the Gold Medal and Diploma of Social and Human Sciences from the MOISIL International Foundation, for his research in multicriteria intelligent decision support systems and their applications in financial management. In 2000 he received the Best Interdisciplinary Research Paper Award from the Decision Sciences Institute and in 2010 he received the highly commended paper award from the Emerald Literati Network. The European Journal of Operational Research has awarded him the Best Reviewer Award in 2010 and the Certificate of Excellence in Reviewing in 2012. Also, in 2012 he was the recipient of the Long-lasting Research Contribution Award in the field of Financial Engineering & Decision Making by ECSP Europe. In 2013 he received the Edgeworth-Pareto prestigious Award from the International Society of Multicriteria Decision Making.

He has edited and authored 75 books in international publishers and more than 450 research papers in scientific journals, edited volumes, conference proceedings and encyclopedias in the areas of finance, accounting, operations research and management science.