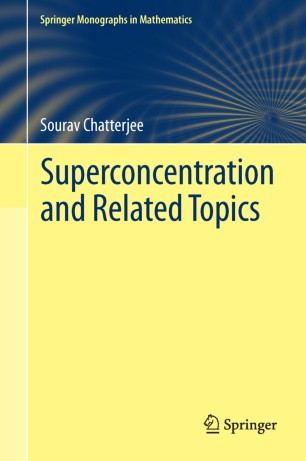 A certain curious feature of random objects, introduced by the author as “super concentration,” and two related topics, “chaos” and “multiple valleys,” are highlighted in this book. Although super concentration has established itself as a recognized feature in a number of areas of probability theory in the last twenty years (under a variety of names), the author was the first to discover and explore its connections with chaos and multiple valleys. He achieves a substantial degree of simplification and clarity in the presentation of these findings by using the spectral approach.

Understanding the fluctuations of random objects is one of the major goals of probability theory and a whole subfield of probability and analysis, called concentration of measure, is devoted to understanding these fluctuations. This subfield offers a range of tools for computing upper bounds on the orders of fluctuations of very complicated random variables. Usually, concentration of measure is useful when more direct problem-specific approaches fail; as a result, it has massively gained acceptance over the last forty years. And yet, there is a large class of problems in which classical concentration of measure produces suboptimal bounds on the order of fluctuations. Here lies the substantial contribution of this book, which developed from a set of six lectures the author first held at the Cornell Probability Summer School in July 2012.

The book is interspersed with a sizable number of open problems for professional mathematicians as well as exercises for graduate students working in the fields of probability theory and mathematical physics. The material is accessible to anyone who has attended a graduate course in probability.