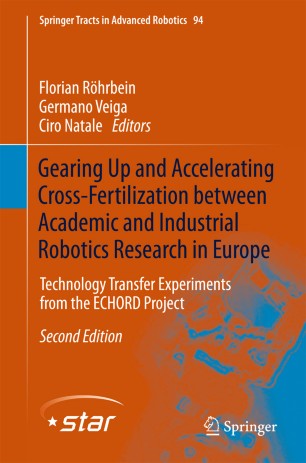 Gearing Up and Accelerating Cross‐fertilization between Academic and Industrial Robotics Research in Europe:

This monograph by Florian Röhrbein, Germano Veiga and Ciro Natale is an edited collection of 15 authoritative contributions in the area of robot technology transfer between academia and industry. It comprises three parts on Future Industrial Robotics, Robotic Grasping as well as Human-Centered Robots. The book chapters cover almost all the topics nowadays considered ‘hot’ within the robotics community, from reliable object recognition to dexterous grasping, from speech recognition to intuitive robot programming, from mobile robot navigation to aerial robotics, from safe physical human-robot interaction to body extenders. All contributions stem from the results of ECHORD – the European Clearing House for Open Robotics Development, a large-scale integrating project funded by the European Commission within the 7th Framework Programme from 2009 to 2013. ECHORD’s two main pillars were the so-called experiments, 51 small-sized industry-driven research projects, and the structured dialog, a powerful interaction instrument between the stakeholders. The results described in this volume are expected to shed new light on innovation and technology transfer from academia to industry in the field of robotics.