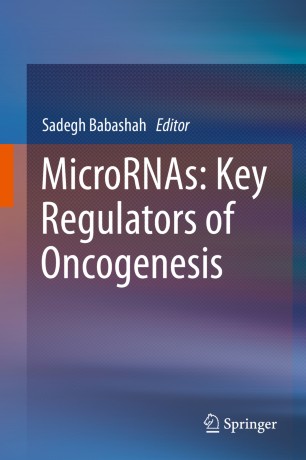 Aberrant expression and function of microRNAs (miRNAs) in cancer have added a new layer of complexity to the understanding of development and progression of the disease state. It has been demonstrated that miRNAs play a momentous role in oncogenesis via regulating cell proliferation and apoptosis as oncogenes or tumour suppressors. Expression signatures of miRNAs offer exciting opportunities for crafting cutting edge strategies in the diagnosis, prognosis, and therapy of cancer. Since miRNAs can function as either oncogenes or tumor suppressor genes in the tortuous route of oncogenesis, the promise represented by using these small RNAs as therapeutic targets presents new perspectives to the landscape of cancer therapy by either inhibiting or augmenting their activity. This book devotes efforts to provide a broad framework for obtaining an in depth understanding of the state-of-the-art knowledge on abnormalities of miRNAs found to be associated with cancer pathogenesis and possible mechanisms underlying the substantial roles played by miRNAs in cancer development and progression. Also, it intends to pave the way for readers to gain novel insights into using miRNAs as cancer biomarkers and therapeutic platforms.