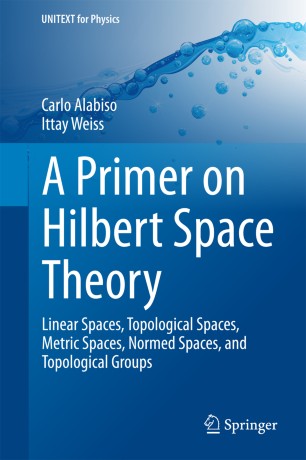 A Primer on Hilbert Space Theory

With respect to the original lectures, the mathematical flavor in all subjects has been enriched. Moreover, a brief introduction to topological groups has been added in addition to exercises and solved problems throughout the text. With these improvements, the book can be used in upper undergraduate and lower graduate courses, both in Physics and in Mathematics.

Prof. Carlo Alabiso obtained his Degree in Physics at Milan University and then taught at Parma University, Parma, Italy for more than 40 years (with a period spent as a research fellow at the Stanford Linear Accelerator Center and at Cern, Geneva). His teaching encompassed topics in quantum mechanics, special relativity, field theory, elementary particle physics, mathematical physics, and functional analysis. His research fields include mathematical physics (Pad\'{e} approximants), elementary particle physics (symmetries and quark models), and statistical physics (ergodic problems), and he has published articles in a wide range of national and international journals as well as the previous Springer book (with Alessandro Chiesa), Problemi di Meccanica Quantistica non Relativistica.

Dr. Ittay Weiss completed his BSc and MSc studies in Mathematics at the Hebrew University of Jerusalem and he obtained his PhD in mathematics from Universiteit Utrecht in the Netherlands. He spent an additional three years in Utrecht as an assistant professor of mathematics, teaching mathematics courses across the entire undergraduate spectrum both at Utrecht University and at the affiliated University College Utrecht. He is currently a mathematics lecturer at the University of the South Pacific. His research interests lie in the fields of algebraic topology and operad theory, as well as the mathematical foundations of analysis and generalizations of metric spaces.

“This book introduces essential ideas and results of Hilbert space and linear operator theory to beginners in quantum physics. … The textbook is suitable for advanced undergraduate or introductory graduate courses for both physics and mathematics students.” (Michael Frank, Mathematical Reviews, August, 2015)