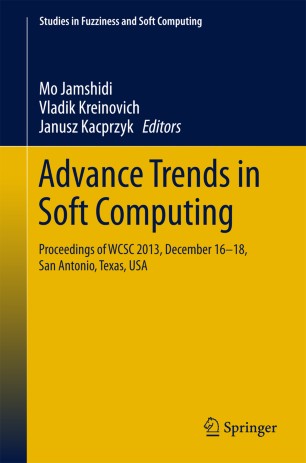 Part of the Studies in Fuzziness and Soft Computing book series (STUDFUZZ, volume 312)

This book is the proceedings of the 3rd World Conference on Soft Computing (WCSC), which was held in San Antonio, TX, USA, on December 16-18, 2013. It presents start-of-the-art theory and applications of soft computing together with an in-depth discussion of current and future challenges in the field, providing readers with a 360 degree view on soft computing. Topics range from fuzzy sets, to fuzzy logic, fuzzy mathematics, neuro-fuzzy systems, fuzzy control, decision making in fuzzy environments, image processing and many more. The book is dedicated to Lotfi A. Zadeh, a renowned specialist in signal analysis and control systems research who proposed the idea of fuzzy sets, in which an element may have a partial membership, in the early 1960s, followed by the idea of fuzzy logic, in which a statement can be true only to a certain degree, with degrees described by numbers in the interval [0,1]. The performance of fuzzy systems can often be improved with the help of optimization techniques, e.g. evolutionary computation, and by endowing the corresponding system with the ability to learn, e.g. by combining fuzzy systems with neural networks. The resulting “consortium” of fuzzy, evolutionary, and neural techniques is known as soft computing and is the main focus of this book.