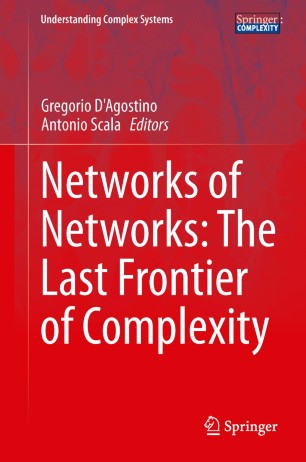 Networks of Networks: The Last Frontier of Complexity

The present work is meant as a reference to provide an organic and comprehensive view of the most relevant results in the exciting new field of Networks of Networks (NetoNets). Seminal papers have recently been published posing the basis to study what happens when different networks interact, thus providing evidence for the emergence of new, unexpected behaviors and vulnerabilities. From those seminal works, the awareness on the importance understanding Networks of Networks (NetoNets) has spread to the entire community of Complexity Science. The reader will benefit from the experience of some of the most well-recognized leaders in this field. The contents have been aggregated under four headings; General Theory, Phenomenology, Applications and Risk Assessment. The reader will be impressed by the different applications of the general paradigm that span from physiology, to financial risk, to transports. We are currently making the first steps to reduce the distance between the language and the way of thinking of the two communities of experts in real infrastructures and the complexity scientists. Although this path may prove to be long, it is extremely promising, both in extending our understanding of complex systems and in finding concrete applications that can enhance the life quality of millions of people.

“The whole book is devoted to the problems of governing, managing and preserving (with special attention to the security and the resistance to natural catastrophes problems) Networks of Networks. Along this book, a lot of practical examples of this kind of devices are considered. … it is complete and gives an integrated approach to this problem. … this is a very interesting book, very pleasant to read, essential either for beginners in this matter or senior researchers.” (Manuel Alberto M. Ferreira, International Journal of Latest Trends in Finance and Economic Sciences, Vol. 4 (1), March, 2014)
Buy options