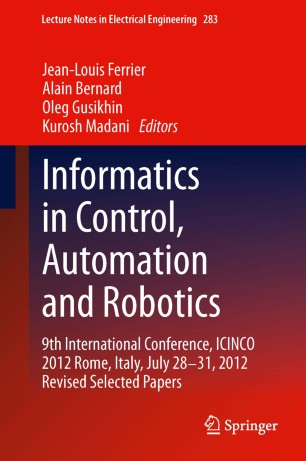 Informatics in Control, Automation and Robotics

This book includes extended and revised versions of a set of selected papers from the Ninth International Conference on Informatics in Control Automation and Robotics (ICINCO 2012), held in Rome, Italy, from 28 to 31 July 2012. The conference was organized in four simultaneous tracks: Intelligent Control Systems and Optimization, Robotics and Automation, Systems Modeling, Signal Processing and Control and Industrial Engineering, Production and Management.

ICINCO 2012 received 360 paper submissions, from 58 countries in all continents. From these, after a blind review process, only 40 were accepted as full papers, of which 20 were selected for inclusion in this book, based on the classifications provided by the Program Committee. The selected papers reflect the interdisciplinary nature of the conference as well as the logic equilibrium between the four abovementioned tracks. The diversity of topics is an important feature of this conference, enabling an overall perception of several important scientific and technological trends.