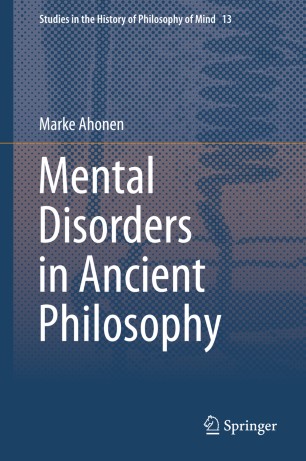 Part of the Studies in the History of Philosophy of Mind book series (SHPM, volume 13)

This book offers a comprehensive study of the views of ancient philosophers on mental disorders. Relying on the original Greek and Latin textual sources, the author describes and analyses how the ancient philosophers explained mental illness and its symptoms, including hallucinations, delusions, strange fears and inappropriate moods, and how they accounted for the respective roles of body and mind in such disorders. Also considered are ethical questions relating to mental illness, approaches to treatment and the position of mentally ill people in societies of the times.

The volume opens with a historical overview that examines ancient medical accounts of mental illness, from Hippocrates' famous Sacred Disease to late antiquity medical authors. Separate chapters interpret in detail the writings of Plato, Aristotle, Galen and the Stoics, and a final chapter summarises the views of various strains of Scepticism, the Epicurean school and the Middle and Neo-Platonists.

Offering an important and useful contribution to the study of ancient philosophy, psychology and medicine, This volume sheds new light on the history of mental illness, and presents a new angle on ancient philosophical psychology. ​

Marke Ahonen is a University Lecturer in Classical Philology and a researcher at the Philosophical Psychology, Morality and Politics Research Unit at the University of Helsinki. Her research interests comprise ancient philosophy and medicine and the interaction between the two. Her publications include translations of several major ancient philosophical writings.