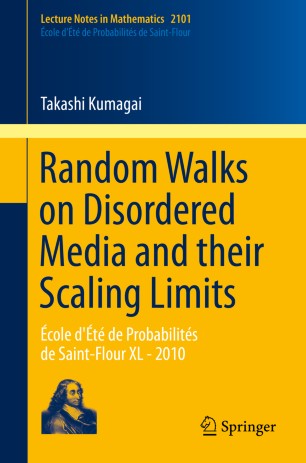 Random Walks on Disordered Media and their Scaling Limits

In these lecture notes, we will analyze the behavior of random walk on disordered media by means of both probabilistic and analytic methods, and will study the scaling limits. We will focus on the discrete potential theory and how the theory is effectively used in the analysis of disordered media. The first few chapters of the notes can be used as an introduction to discrete potential theory.

Recently, there has been significant progress on the theory of random walk on disordered media such as fractals and random media. Random walk on a percolation cluster (‘the ant in the labyrinth’) is one of the typical examples. In 1986, H. Kesten showed the anomalous behavior of a random walk on a percolation cluster at critical probability. Partly motivated by this work, analysis and diffusion processes on fractals have been developed since the late eighties. As a result, various new methods have been produced to estimate heat kernels on disordered media. These developments are summarized in the notes