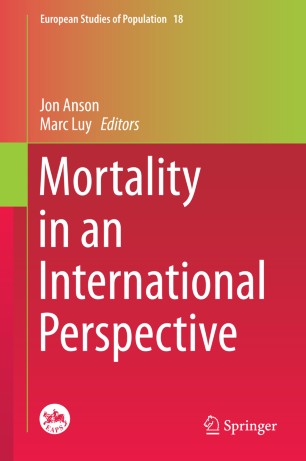 Mortality in an International Perspective

This volume presents a state of the art coverage of the measurement and evolution of mortality over time. It describes in great detail the changes in the cause patterns of mortality, the changes in mortality patterns at different ages, and specific analyses of mortality in particular countries. Derived from a meeting of the European Working Group on Health, Morbidity and Mortality held at the Vienna Institute of Demography, September 2011, it presents a cross-section of the work and concerns of mortality researchers across Europe, ranging from London and Madrid in the west to Moscow in the east, with a few additions from further afield. Although most of the papers focus on a particular population, the range of the papers is broad; taken together they present an inter-disciplinary cross-section of this multi-faceted field. Coverage includes estimating life expectancy in small areas, with an application to recent changes in US counties; socioeconomic determinants of mortality in Europe using the latest available data and short-term forecasts; predicting mortality from profiles of biological risk and performance measures of functioning; infant mortality measurement and rate of progress on international commitment using evidence from Argentina; avoidable factors contributing to maternal deaths in Turkey; changes in mortality at older ages: the case of Spain (1975- 2006); variable scales of avoidable mortality within the Russian population; long-term mortality decline in East Asia, and much more. Perspectives in Mortality Research will serve as a valuable resource for professionals and students in sociology, demography, public health and personal finance.