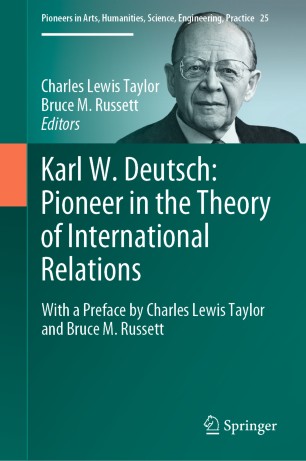 Karl W. Deutsch: Pioneer in the Theory of International Relations

With a Preface by Charles Lewis Taylor and Bruce M. Russett

This is a memorial for Karl Wolfgang Deutsch, a pioneering political scientist, international relations specialist and peace scholar of the 20th century. Born in Prague, he was a professor at MIT, Yale and Harvard and spent a decade at the Social Science Center Berlin (WZB). He was a global leader in the theory and scientific analysis of international relations and comparative politics who published on nationalism, social communication, European integration, war and peace, arms control, social cybernetics, general systems analysis, and global modelling. He pioneered the development and analysis of large-scale political and social data across nations and over time and proposed a widespread access to these data and their scientific evaluation.
This book offers biographical data on Karl W. Deutsch, reproduces chapters from his PhD thesis and his book Nerves of Government. Colleagues from the USA (A.S. Markovits, H. Alker, R.L. Pfaltzgraff, Jr.,P. J. Katzenstein, T.R. Cusack, C.L. Taylor), Germany (D. Senghaas,  R. Wildenmann, R. Mackensen, K. v. Beyme) and the Czech Republic (M. Hroch) offer Collegial Critiques and Memorials. It provides a comprehensive bibliography of his publications and memorials for a great scholar, a superb academic teacher and world citizen.
• Karl Wolfgang Deutsch was a major global pioneer in Political Science, international
relations and peace research in the 20th century.
• His most creative contributions were the concept of social mobilization, the use of cybernetics
to study human relationships, the introduction of politics in world modeling, and the role of communication in governance.
• He was president of the American Political Science Association (1969-70) and of the
International Political Science Association (1976-79) and was a Director of the Social
Science Research Center Berlin (1977-87).
• Academics, including graduate students, exploring nationalism, political integration,
social communications, cybernetics, and global modeling will find this volume instructive.