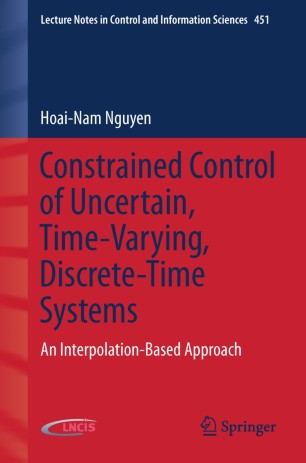 A comprehensive development of interpolating control, this monograph demonstrates the reduced computational complexity of a ground-breaking technique compared with the established model predictive control. The text deals with the regulation problem for linear, time-invariant, discrete-time uncertain dynamical systems having polyhedral state and control constraints, with and without disturbances, and under state or output feedback. For output feedback a non-minimal state-space representation is used with old inputs and outputs as state variables.

Constrained Control of Uncertain, Time-Varying, Discrete-time Systems details interpolating control in both its implicit and explicit forms. In the former at most two linear-programming or one quadratic-programming problem are solved on-line at each sampling instant to yield the value of the control variable. In the latter the control law is shown to be piecewise affine in the state, and so the state space is partitioned into polyhedral cells so that at each sampling interval the cell to which the measured state belongs must be determined. Interpolation is performed between vertex control, and a user-chosen control law in its maximal admissible set surrounding the origin.

Novel proofs of recursive feasibility and asymptotic stability of the vertex control law, and of the interpolating control law are given. Algorithms for implicit and explicit interpolating control are presented in such a way that the reader may easily realize them. Each chapter includes illustrative examples, and comparisons with model predictive control in which the disparity in computational complexity is shown to be particularly in favour of interpolating control for high-order systems, and systems with uncertainty. Furthermore, the performance of the two methods proves similar except in those cases when a solution cannot be found with model predictive control at all. The book concludes with two high dimensional examples and a benchmark robust model predictive control problem: the non-isothermal continuously-stirred-tank reactor.

For academic control researchers and students or for control engineers interested in implementing constrained control systems Constrained Control of Uncertain, Time-Varying, Discrete-time Systems will provide an attractive low-complexity control alternative for cases in which model predictive control is currently attempted.

“The aim of this book is to propose an alternative approach to the model predictive control. The book consist of three parts: background, interpolating control and applications. … Each chapter includes interesting illustrative examples. The book is addressed to graduate students and scientists in control systems theory.” (Tadeusz Kaczorek, zbMATH, Vol. 1301, 2015)
Buy options