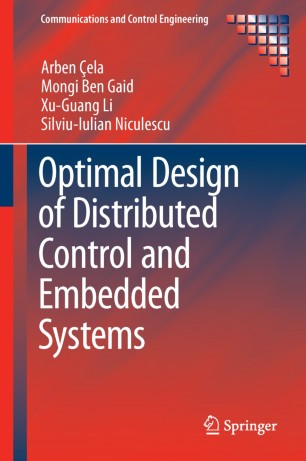 Optimal Design of Distributed Control and Embedded Systems focuses on the design of special control and scheduling algorithms based on system structural properties as well as on analysis of the influence of induced time-delay on systems performances. It treats the optimal design of distributed and embedded control systems (DCESs) with respect to communication and calculation-resource constraints, quantization aspects, and potential time-delays induced by the associated  communication and calculation model.

Particular emphasis is put on optimal control signal scheduling based on the system state. In order to render  this complex optimization problem feasible in real time, a time decomposition is based on periodicity induced by the static scheduling is operated. The authors present a co-design approach which subsumes the synthesis of the optimal control laws and the generation of an optimal schedule of control signals on real-time networks as well as the execution of control tasks on a single processor. The authors also operate a control structure modification or a control switching based on a thorough analysis of the influence of the induced time-delay system influence on stability and system performance in order to optimize DCES performance in case of calculation and communication resource limitations. Although the richness and variety of classes of DCES preclude a completely comprehensive treatment or a single “best” method of approaching them all, this co-design approach has the best chance of rendering this problem feasible and finding the optimal or some sub-optimal solution. The text is rounded out with references to such applications as car suspension and unmanned vehicles.

Optimal Design of Distributed Control and Embedded Systems will be of most interest to academic researchers working on the mathematical theory of DCES but the wide range of environments in which they are used also promotes the relevance of the text for control practitioners working in the avionics, automotive, energy-production, space exploration and many other industries.

Silviu-Iulian Niculescu was born in Petrosani, Romania in 1968. He received the B.S. degree from the Polytechnical Institute of Bucharest, Romania, the M.Sc., and Ph.D. degrees, both in Automatic Control, from the Institut National Polytechnique de Grenoble, France, and the “Habilitation à Diriger des Recherches” (HDR) in Automatic Control from Université de Technologie de Compiègne, in 1992, 1993, 1996, and 2003, respectively. From 1992 to 1997, he was with the Department of Automatic Control and Computers, University “Politehnica” Bucharest, Romania. From 1997 to 2006, he was with HEUDIASYC (“Heuristics and diagnosis of complex systems”) laboratory, Compiègne, France as a Researcher at CNRS (French National Center for Scientific Research). He also held a PostDoctoral position in the Department of Applied Mathematics, ENSTA, Paris, France, from 1996 to 1997. In September 2006, he joined L2S (Laboratory of Signals and Systems), Gif-sur-Yvette, where he is currently Research Director (“Senior Researcher”) at CNRS and head of the laboratory. He is the single author of two books: delay systems. Qualitative aspects on the stability and stabilization (Diderot: Paris, 1997; in French), and Delay effects on stability. A robust control approach (Springer: Heidelberg, LNCIS, vol. 269, 2001; in English), co-author of one book (with Wim Michiels) entitled Stability and stabilization of time-delay systems. An eigenvalue-based approach (SIAM: Philadelphia, USA, 2007) and co-editor of five volumes (SIAM, 1999; Pergamon Press, 2001; Springer 2004; Springer 2007; Springer 2009). He is author or co-author of more than 300 book chapters or scientific papers. He has been the IPC Chairman of the 3rd IFAC Workshop on Time-Delay Systems (Santa Fe, NM, USA, December 2001) and of the 8th IFAC Workshop on Time-Delay Systems (Sinaia, Romania, September 2009), and the main organizer or co-organizer of the 1st CNRS-NSF Workshop on Time-Delay Systems (Paris: La Défense, January 2003), and of the 23rd European Summer School in Automatic Control (Grenoble, September 2000) devoted to time-delay systems. He was the guest co-editor of five special issues in the area of delay systems (Journal of Mathematical Modelling of Natural Phenomena (MMNP) in 2009 Asian Journal of Control in 2005, IMA Journal of Mathematical Control and Information in 2002 and 2010, and Kybernetika in 2001). Dr. Niculescu has been scientific responsible of 14 international cooperation programs and projects (with Belgium, Mexico, Romania and Eastern European countries, South Korea, Turkey and United States). He is member of IFAC Technical Committee on Linear Systems (since 2002) and of the IPC of 33 International Conferences, and he was an Associate Editor of the IEEE Transactions on Automatic Control (2003-2005). Since 2011, He is an Associate Editor of European Journal of Control and IMA Journal of Mathematical Control and Information. He is the responsible of the IFAC Research Group on “Time-delay systems” since its creation in October 2007. Dr. Niculescu was awarded the CNRS Bronze Medal for scientific research, the Best Paper Presentation Award at American Control Conference, Chicago, IL and the Ph.D. Thesis Award from INPG, Grenoble (France) in 2001, 2000, and 1996, respectively. His research interests include delay systems, robust control, operator theory, and numerical methods in optimization, and their applications to the design of engineering systems.