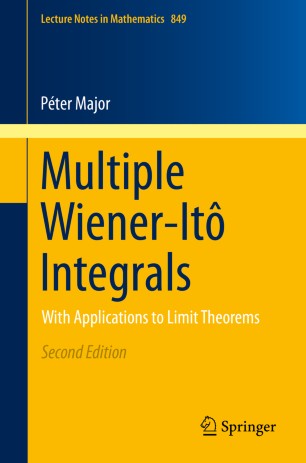 With Applications to Limit Theorems

The goal of this Lecture Note is to prove a new type of limit theorems for normalized sums of strongly dependent random variables that play an important role in probability theory or in statistical physics. Here non-linear functionals of stationary Gaussian fields are considered, and it is shown that the theory of Wiener–Itô integrals provides a valuable tool in their study. More precisely, a version of these random integrals is introduced that enables us to combine the technique of random integrals and Fourier analysis. The most important results of this theory are presented together with some non-trivial limit
theorems proved with their help.
This work is a new, revised version of a previous volume written with the goalof giving a better explanation of some of the details and the motivation behind the proofs. It does not contain essentially new results; it was written to give a better insight to the old ones. In particular, a more detailed explanation of generalized fields is included to show that what is at the first sight a rather formal object is actually a useful tool for carrying out heuristic arguments.