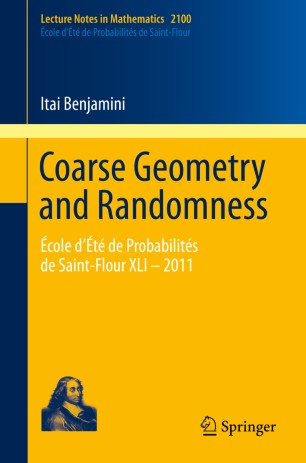 These lecture notes study the interplay between randomness and geometry of graphs. The first part of the notes reviews several basic geometric concepts, before moving on to examine the manifestation of the underlying geometry in the behavior of random processes, mostly percolation and random walk.

The study of the geometry of infinite vertex transitive graphs, and of Cayley graphs in particular, is fairly well developed. One goal of these notes is to point to some random metric spaces modeled by graphs that turn out to be somewhat exotic, that is, they admit a combination of properties not encountered in the vertex transitive world. These include percolation clusters on vertex transitive graphs, critical clusters, local and scaling limits of graphs, long range percolation, CCCP graphs obtained by contracting percolation clusters on graphs, and stationary random graphs, including the uniform infinite planar triangulation (UIPT) and the stochastic hyperbolic planar quadrangulation (SHIQ).