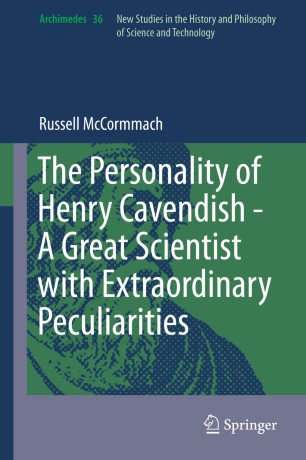 The Personality of Henry Cavendish - A Great Scientist with Extraordinary Peculiarities

Profiles the eminent 18th century natural philosopher Henry Cavendish, best known for his work in chemistry and physics and one of the most baffling personalities in the history of science. In these chapters we are introduced to the psychology of science and of scientists and we learn about Cavendish’s life and times. His personality is examined from two perspectives: one is that he had a less severe form of autism, as has been claimed; the other is that he was eccentric and a psychological disorder was absent.

Henry Cavendish lived a life of science, possibly more completely than any other figure in the history of science: a wealthy aristocrat, he became a dedicated scientist. This study brings new information and a new perspective to our understanding of the man. The scientific and non-scientific sides of his life are brought closer together, as the author traces topics including his appearance, speech, wealth, religion and death as well as Cavendish’s life of natural philosophy where objectivity and accuracy, writing and recognition all played a part.

The author traces aspects of Cavendish’s personality, views and interpretations of him, and explores notions of eccentricity and autism before detailing relevant aspects of the travels made by our subject. The author considers the question “How do we talk about Cavendish?” and provides a useful summary of Cavendish’s travels.

This book will appeal to a wide audience, from those interested in 18th century history or history of science, to those interested in incidences of autism in prominent figures from history. This volume contains ample relevant illustrations, several interesting appendices and it includes a useful index and bibliography. ​