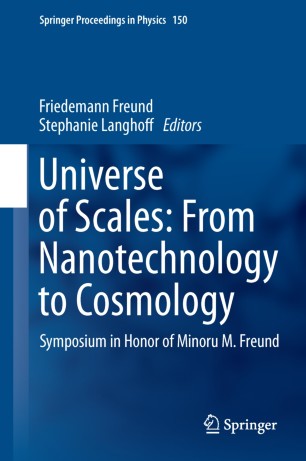 Universe of Scales: From Nanotechnology to Cosmology

The presentations at this NASA-hosted Symposium in honor of Mino Freund will touch upon the fields, to which his prolific mind has made significant contributions. These include low temperature physics, cosmology, and nanotechnology with its wide-ranging applicability to material science, neuroscience, Earth sciences and satellite technology.  To learn more about Mino’s career you can download the "Tribute" <http://multimedia.seti.org/mino/Tribute.pdf>, which outlines his journey from (i) low-temperature physics and superconductivity at the ETH Zürich to (ii) building one remarkable milliKelvin refrigerator for the US-Japan IRTS mission at UC Berkeley and ISAS in Japan to (iii) a decade in cosmology, to (iv) being on the micro-bolometer team at NASA Goddard for the HAWC instrument on SOFIA, to (v) developing at AFRL the nanotechnology portfolio for the entire Air Force.  This was followed by six years at the NASA Ames Research Center, where Mino formulated his far-ahead ideas about swarms of capable nanosats circling the Earth, which have since started to become a reality. He engaged in a broad range of nanotechnology projects, including novel applications in neuroscience well before he himself was struck by the deadly brain tumor.