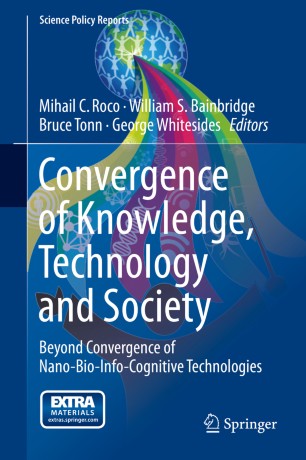 Convergence of Knowledge, Technology and Society

Beyond Convergence of Nano-Bio-Info-Cognitive Technologies

Convergence of knowledge and technology for the benefit of society (CKTS) is the core opportunity for progress in the 21st century, based on five principles: (1) the interdependence of all components of nature and society, (2) enhancement of creativity and innovation through evolutionary processes of convergence that combine existing principles, and divergence that generates new ones, (3) decision analysis for research and development based on system-logic deduction, (4) higher-level cross-domain languages to generate new solutions and support transfer of new knowledge, and (5) vision-inspired basic research embodied in grand challenges. Solutions are outlined for key societal challenges, including creating new industries and jobs, improving lifelong wellness and human potential, achieving personalized and integrated healthcare and education, and securing a sustainable quality of life for all. This report provides a ten-year “NBIC2” vision within a longer-term framework for converging technology and human progress that began with a previous study on “NBIC” fields: nanotechnology, biotechnology, information technology, and cognitive science (Roco and Bainbridge, 2003).

This is truly an impressive body of work, which advances a transformative collection of concepts that could impact many areas of society and science. The ideas of this study are exciting.

The CKTS study presents inspirational ideas behind the concept of convergence and identifies ground-breaking opportunities for human progress through such convergence.

The study provides a systematic and unified, internationally benchmarked framework for convergence that is relevant to policymakers, entrepreneurs, researchers, and the general public.

I consider .. the first NBIC study in 2001.. as an historical landmark that has caused a new dynamic in the reflection on these new technologies within the broad scientific and governmental community.

Dr. Mihail C. Roco is the Senior Advisor for Nanotechnology at the National Science Foundation (NSF) and a key architect of the National Nanotechnology Initiative. Dr. Roco is the founding Chair of the U.S. National Science and Technology Council’s Subcommittee on Nanoscale Science, Engineering and Technology (NSET) and established the Nanotechnology Group of the International Risk Governance Council. Prior to joining National Science Foundation, he was Professor of mechanical and chemical engineering. Dr. Roco is credited with thirteen patents and has contributed over two hundred archival articles in sixteen books including recently 'Managing Nano-Bio-Info-Cognition Innovations' (2007) and 'Mapping Nanotechnology Knowledge and Innovation: Global and Longitudinal Patent and Literature Analysis' (2009). Dr. Roco is a corresponding member of the Swiss Academy of Engineering Sciences and a member of the International Risk Governance Council. His research included experimental and simulation methods to investigate nanosystems. He formally proposed the National Nanotechnology Initiative (NNI) in a presentation at The White House OSTP, Committee on Technology, on March 11, 1999. He conducted research, teaching, consulting to industry, and international organizations in the Americas, Europe, Japan, and Australia. He is a Fellow of ASME, Fellow of AIChE and Fellow of the Institute of Physics. He was elected Engineer of the Year by the U.S. Society of Professional Engineers and NSF in 1999 and again in 2004. He was honored as recipient of the Carl Duisberg Award in Germany, the 'Burgers Professorship Award' in The Netherlands, and the 'University Research Professorship' and Fingerson/TSI awards in the U.S. He received the National Materials Advancement Award from the Federation of Materials Societies in 2007 as 'the individual most responsible for support and investment in nanotechnology by government, industry, and academia worldwide'.
William Sims Bainbridge is an American sociologist who currently resides in Virginia. He is co-director of Human-Centered Computing at the National Science Foundation (NSF). He is the first Senior Fellow to be appointed by the Institute for Ethics and Emerging Technologies. Professor Bainbridge is most well known for his work on the sociology of religion. He has published extensively on the sociology of computer gaming, and he has pioneered the use of online virtual worlds for scientific conferences and research proposal review panels. He has edited two major reference works relevant to NBIC, The Encyclopedia of Human-Computer Interaction and Leadership in Science and Technology. His doctoral research and first book concerned the social movement dedicated to exploration of outer space, and he has returned to that topic for the book he is currently writing, examining the social and intellectual barriers to future progress in that direction.
Bruce Tonn, is a professor at the University of Tennesee. Dr. Tonn's research focuses on environmental and energy policy, futures studies, sustainability, and policy decision making methods. It also includes uncertainty methods, technology policy, computers in society, and social theory.
George Whitesides, is a Woodford L. and Ann A. Flowers Professor at Harvard University. His research interests are: physical and organic chemistry, materials science, biophysics, complexity and emergence, surface science, microfluidics, optics, self-assembly, micro- and nanotechnology, science for developing economies, catalysis, energy production and conservation, origin of life, rational drug design, cell-surface biochemistry, simplicity, and infochemistry.