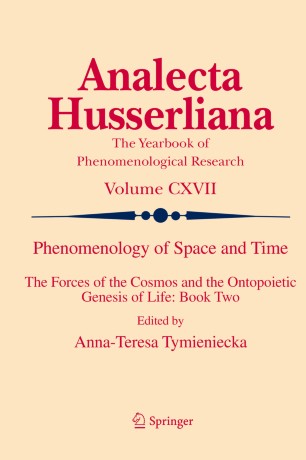 Phenomenology of Space and Time

The Forces of the Cosmos and the Ontopoietic Genesis of Life: Book Two

This work celebrates the investigative power of phenomenology to explore the phenomenological sense of space and time in conjunction with the phenomenology of intentionality, the invisible, the sacred, and the mystical. It examines the course of life through its ontopoietic genesis, opening the cosmic sphere to logos. The work also explores, on the one hand, the intellectual drive to locate our cosmic position in the universe and, on the other, the pull toward the infinite. It intertwines science and its grounding principles with imagination in order to make sense of the infinite.

This book is the second of a two-part work that contains papers presented at the 62nd International Congress of Phenomenology, The Forces of the Cosmos and the Ontopoietic Genesis of Life, held in Paris, France, August 2012. It features the work of scholars in such diverse disciplines as biology, anthropology, pedagogy, and psychology who philosophically investigate the cosmic origins of beingness.

Coverage in this second part includes: Communicative Virtues of A-T. Tymieniecka’s Phenomenology of Life, Intentionality of Time and Quantum – Phenomenological Sense of Space, Consciousness of the Cosmos: A Thought Experiment Through Philosophy and Science Fiction, The Cosmos and Bodily Life on Earth Elucidated within the Historicity of Human Existence, Novel as Path - Mamardashvili's Lectures on Proust, and Comments on Max Scheler's Thought and Philosophical Counseling.