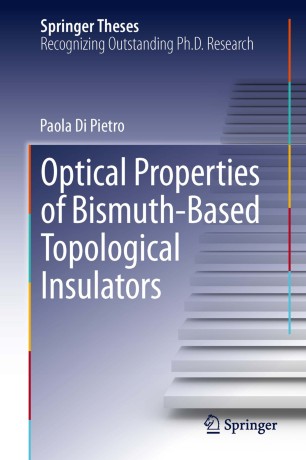 Topological Insulators (TIs)  are insulators in the bulk, but have exotic metallic states at their surfaces. The topology, associated
with the electronic wavefunctions of these systems, changes when passing from the bulk to the surface.This work studies, by means of infrared spectroscopy, the low energy optical conductivity of Bismuth based TIs in order to identify the
extrinsic charge contribution of the bulk and to separate it from the intrinsic contribution of the surface state carriers. The extensive results presented in this thesis definitely shows the 2D character of the carriers in Bismuth-based topological insulators. The experimental apparatus and the FTIR technique, the theory of optical properties and Surface Plasmon Polaritons, as well as sample preparation of both crystals and thin films, and the analysis procedures are thoroughly described.

Dr. Paola Di Pietro received both her three-year (2006) and her Master (2009, with highest marks) degrees in Physics from "Sapienza" University of Rome. She has five journal publications to her name, one of which in Nature Nanotechnology, with another article soon to come. She is currently affiliated to INSTM UdR Trieste-ST Area Science Park, Trieste, Italy. Her PhD thesis was nominated as the best in Materials Science.