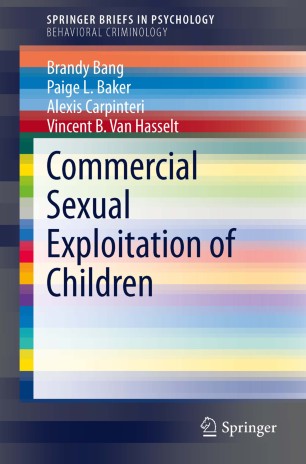 Biological, psychological, and environmental risk factors leave children and adolescents vulnerable to corruption, coercion, and violence, as in cases of young people being trafficked and sexually exploited. While the public tends to associate such abuses with far-off locales, the numbers of American-born children targeted by sex traffickers, and of international youth brought to the U.S. by these exploiters, are growing and disturbing.

Concise and well-detailed, Commercial Sexual Exploitation of Children examines the severity and complexity of this form of crime, and how it is being addressed through law enforcement and legal channels. The book examines variables that make children susceptible to exploitation, with a special focus on male victims. Mechanisms of the offenses are covered, as are the current state of federal laws and strengths and shortcomings of prosecution efforts. Real-life case examples from federal law enforcement describe major forms of exploitation and victim and offender characteristics, with clear focus on such areas as:

Commercial Sexual Exploitation of Children is a ready source of facts geared toward assisting professionals on the frontlines of intervention and prevention with this often-marginalized population, from health care and mental health providers and researchers to legislative bodies and law enforcement, as well as students interested in criminal justice, psychology, or law.